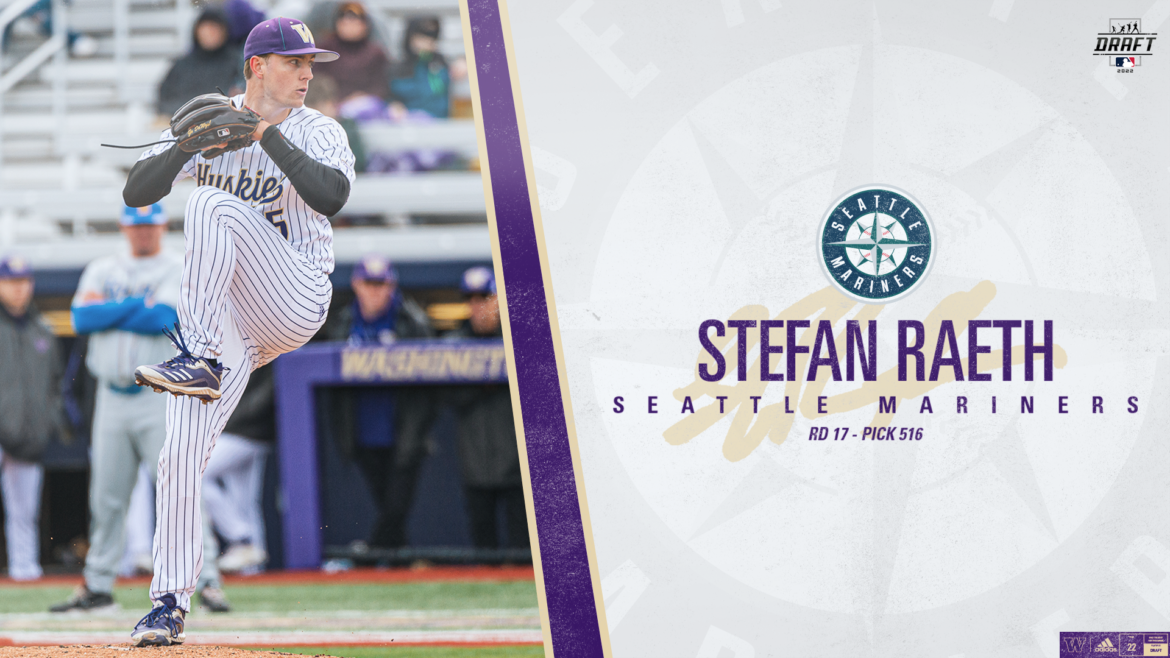 For the second year in a row, a player from Acalanes was drafted by a major league baseball team. Last year, Davis Diaz, a shortstop, was drafted right out of high school in the 10th round by the Arizona Rattlers but opted to matriculate and play baseball for Vanderbilt University.

This past month, Stefan Raeth, a right-handed pitcher, after attending, Napa J.C., Los Medanos, and the University of Washington, was selected in the 17th round by the Seattle Mariners. It was a true family affair with Stefan, his sister Simone and their parents Thomas and Tamara together as they watched the draft on TV. “It was very cool and was almost surreal because I knew, when Stefan was young, he had a true passion for the sport,” said Thomas. “It was fantastic to see him drafted.”

At 5’10” 140 and with an 85 mph fastball when he played for Acalanes, Raeth was well aware that he needed to get bigger and stronger. “Looking back, I’m not the same person I was there, but I have nothing but good things to say about my time at Acalanes,” Raeth said.  Attending Los Medanos proved to be a key factor in Raeth’s growth as a player. “It was a good fit and they proved to be some of the best coaches I had worked with. I hit 90 mph for the first time at Los Medanos. After I added the weight, I got more consistent with my velocity,” Raeth said.  It was the staff at Los Medanos that got Raeth’s name out to the coaches at Washington. Though no promises were made to Raeth by Washington, he was welcomed to the team as a walk-on. “They told me that they would love to have me, but they did not know if I would be able to make the team,” Raeth said “I knew I didn’t have to have a big scholarship but it’s who you are and how you play on the field that matters.”

Majoring in finance in his two years at Washington, Raeth would appear in 56 of the 106 games Washington played, welcoming every opportunity to show what he could do. “My first year, I was used in short relief and in my second year, I averaged two appearances each weekend and if they asked me to start, I would start,” Raeth said.

At Washington, Raeth was a fastball, slider, change up pitcher knowing how those pitches play off each other and was most comfortable throwing the slider (a breaking ball that is slower than a fastball but faster than a curveball).  “I threw my slider as much as my fastball and I always tried to find a way to throw the slider because it was such a plus pitch for me,” Raeth said. “Everybody knew they were going to get a lot of sliders and I just had to find ways to adapt when the hitters knew what was coming.” Raeth, a longtime S.F. Giants fan who bats lefty because he was a big Barry Bonds fan from an early age has also been compared to former Giants pitcher Sergio Romo whose main pitch was also the slider. “At Washington I was told that my slider is very similar to Romo’s,” Raeth said. “I’ve been compared to him quite a bit though I do throw harder than he does now. The Mariners are a team that stresses throwing the slider with their minor league teams, and they suggested throwing it 85% of the time and I see nothing wrong with that.”

Raeth had little time to sit around and ponder his future as he was almost immediately called, along with all of the other Seattle draftees and free agents, to report to their complex in Peoria, Arizona. “We had lot of talks about how the Mariners do things,” Raeth said. “The pitching coach gave us a rundown as to what they wanted us to do this year and the next in seeing what we could do. There was a lot of analytical stuff such as spin rates on our pitches and how they grade the pitchers. They were all aware of my skills coming in. Velocity is king and they let us know the harder you throw the better your pitches are, in general, so I am trying to put on weight in order to do that. A lot of that comes in the weight room where a lot of the unseen games are, and it will be seen when you get out on the mound.”

Raeth learned soon enough where he would begin his professional career. “I had just moved into an apartment and then received a text that I was going to be playing for their low A team in Modesto. I met my parents at the Oakland airport where they dropped off my car and I drove the 73 miles to Modesto with a teammate, which helped since it would have been a $200 Uber ride. Playing there is a way to get our feet wet and learn what we’re supposed to do and how to execute the way they want you to do things. For the next five weeks, we will play six games a week. It is exciting.”

It’s been a whirlwind since that eventful draft day for Raeth: “I heard from a lot of people that I hadn’t heard from in a while. I’m thankful for the opportunity and hopefully it will all work out. I just want to find ways to get better.”

NCS Tickets: What you Need to Know