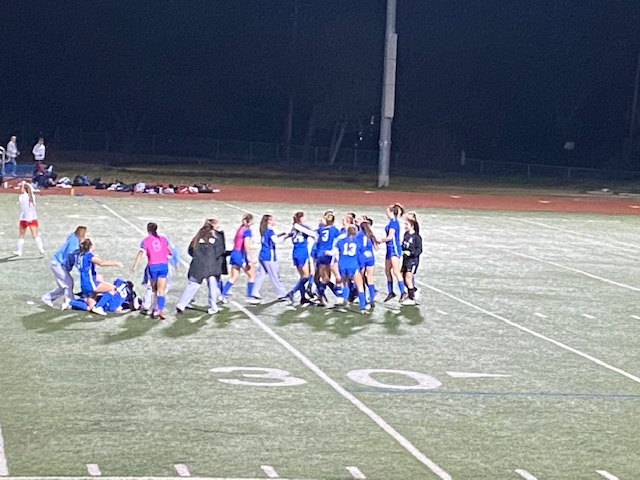 Acalanes Girls Soccer hosted crosstown rival Campolindo Friday night. In front of a huge crowd, the Dons defeated the Cougars 2-0, beating Campo for the first time since 2015. Though it was a hard-fought match, the Dons were in the driver’s seat for the majority of the game, controlling the ball and maintaining the momentum. The Dons scored their first goal of the night when FRESHMAN Nicole Nguyen, who received the ball from senior Natalie Means, stayed composed at the top of the box and found the back of the net on a beautiful arcing shot. The Dons went into halftime with a 1-0 lead, though many in attendance were muttering to each other about penalty shots that should have been called in favor of the Dons and an unfortunate offsides call that penalized Means for being too fast, instead of actually being offsides.

After halftime, the Dons maintained their focus, despite the unusually large crowd and the officiating crew. The Dons added another point to the scoreboard when Means scored top left corner from a nice dribble and pass from junior defender Jacque Peacock. That would be the final goal of the night with junior goalkeeper Catherine Judson adding another shutout to her resume.

Varsity coach Nick Barbarino reveled in his first victory over Campo since becoming head coach of the Acalanes Girls Soccer program. He was impressed with the play of the entire team, and most especially the whole back line – senior Chloe Quintella, junior Jacque Peacock, senior Taylor Carlin, senior Sammy Hess – and juniors Addie Bailey, Tatum Zuber and Cam Salazar as well. The atmosphere of the game was unlike anything that the Girls Soccer program has seen before, thanks to all of the extra fans in attendance; it was truly a great night for Acalanes Girls Soccer.

The JV Dons also had the tough task of playing Campo not once, but twice this week. On Monday, the Dons were victorious with a 1-0 score over the JV Cougars. The JV Dons played hard against the JV Cougars again tonight, but this time the final score was 1-1, with freshman Lucca Debiasse scoring the lone goal for the Dons.

Earlier in the week, Varsity played Berean Christian on the Eagle’s smaller-than-usual field. Despite the unusual field size, the Dons were able to score three unanswered goals in the 3-0 victory. Senior Natalie Means scored the first goal of the afternoon, unassisted. Even though the Dons shot countless times, the score was only 1-0 going into halftime. In the second half, Means scored again, this time from a beautiful pass by junior Tatum Zuber. The final goal of the game was put into the back of the net by freshman Alex Salazar, assisted by a Sammy Hess throw in.

The Dons are looking forward to playing three home games next week and would love to have our cheering squad back out for all three: Monday vs Piedmont at 7pm, Thursday vs Benicia at 7pm – JV at 5pm, and Saturday vs El Cerrito at 6pm – JV at 4pm. The Frosh team is slated to play home games this week as well: Saturday vs Clayton Valley at 6pm, as well as next Saturday vs Campo at 9am and Las Lomas at 1:30pm. Go Dons!