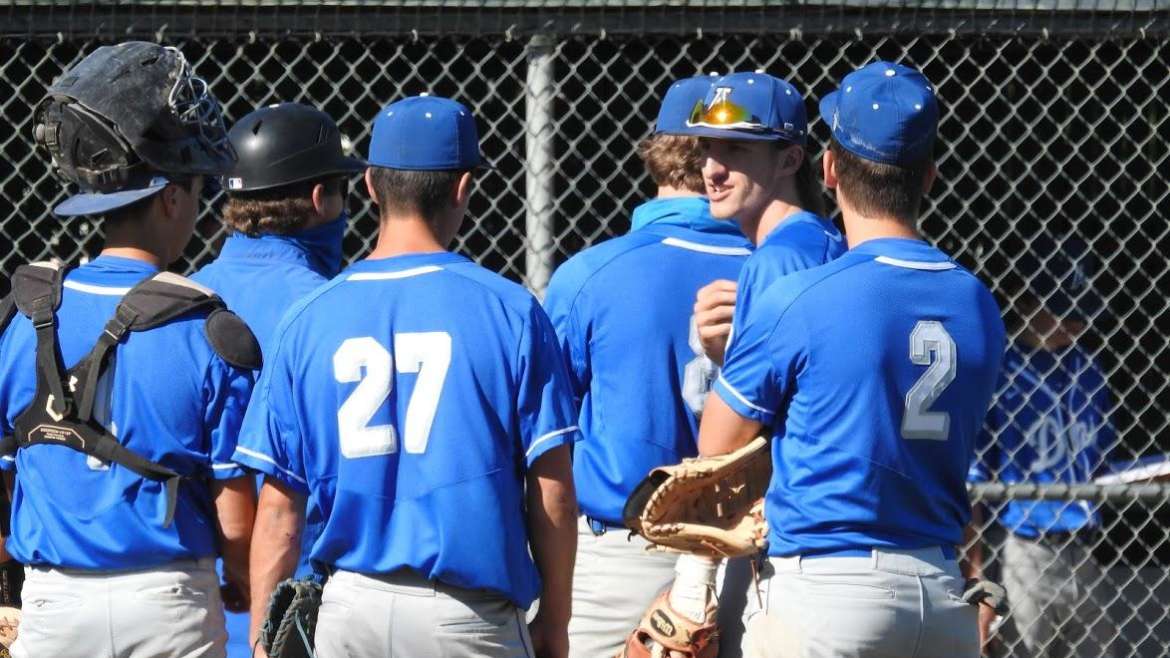 The Dons varsity baseball team spoiled senior night for the Clayton Valley Charter baseball team.  Clayton Valley entered the game tied for 1st place in DAL, boasting both a strong lineup and pitching staff with several D1 commits.  Someone forgot to tell the Dons they should be concerned.

The Dons got things started early, putting up 3 runs in their first two innings, highlighted by several quality at bats up and down the lineup and a line drive single by Miles Bergman (jr).  However, it was clear early on that a 3-run lead wasn’t going to stand up against the Clayton Valley bats and they came back with 3 runs of their own in the bottom of the 2nd.  Clayton Valley added 2 more runs in the 3rd .  With 1 run already in on the 4th, the Dons brought in Freshman Peter Thorn for his varsity pitching debut.  The bases were loaded with 1 out, and Clayton Valley’s clean-up hitter up was due up—welcome to varsity Mr. Thorn!   Peter was able to get #4 hitter to pop up to Brady Huchingson and the #5 hitter to fly out to Will Berrien.  It was clearly the spark the Dons needed.

Down 6-3, but certainly not out, the Dons proceeding to put up perhaps their best inning of the year in the top of the 5th.  Sam Heyman (sr) led off the inning with a walk and advanced to 3rd on double down the right field line by Luke Souza (jr).  Heyman scored on the next play on a ground ball by Will Berrien (jr).  Ben Burleigh (sr) followed with a perfectly executed safety squeeze, and Ben proceeded to beat out the throw diving head-first into first base as the ball sailed over the 1st baseman’s head.  The Dons tied the score on a hard-hit line drive single by Jack Cusumano (jr).  The Dons weren’t done, though, and with the bases loaded Kyle White (jr) cleared the bases on a line drive double into the right-center field gap, giving the Dons the 9-6 lead.  Singles by Brady Huchingson (sr) and Will Berrien (jr) brought in 2 more runs and lifted the score to 11-6.

Fortunately for the Dons, senior Sam Heyman hasn’t quite graduated.  Sam dazzled as he shut down the heart of Clayton Valley’s lineup in a row in the 7th to seal the victory.  It was great win for the Dons and their best offensive outing of the year.  They finished with 12 hits, with almost all players recording at least one, and Kyle White, Brady Huchingson, Luke Souza and Jack Cusumano each recording two.

The Dons close out their season this week with Tuesday (away) and Thursday (home) games against Clayton Valley.  Thursday is senior night, so plan to come celebrate the end of finals at 3:45pm and bid adieu to a special class of senior ball players.