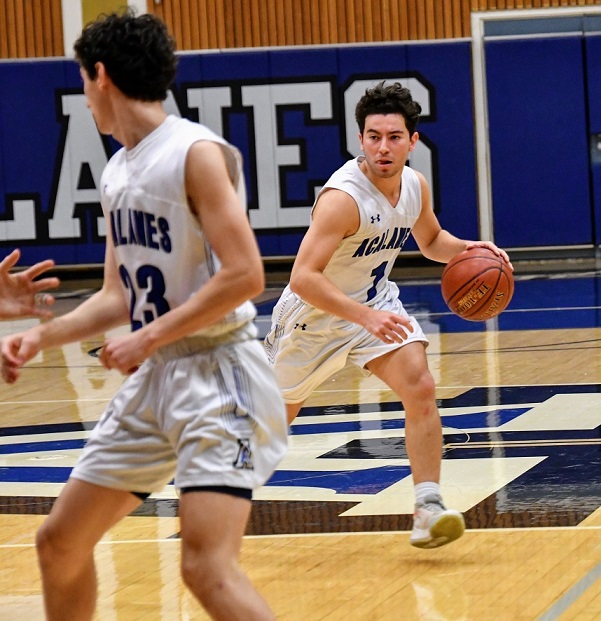 The Dons Varsity Boys Basketball team finished its season with a nail-biter loss to the Los Lomas Knights, as an explosive second quarter was not enough to overcome a second-half scoring doldrums.

The Dons started the game emphatically, as sophomore Jake Davis finished a pick and roll with a one-hand jam on the Dons’ second possession, followed by a three from Senior Scott Ruegg. The teams spent the remainder of the quarter sparring, with two point buckets from each of senior Graham Smith, senior Joey Carillo, and freshman Marcus Robinson, but neither team landed any power punches. 13-11 Knights at the end of one.

The second quarter was a different story, with the Dons upping the intensity and nearly landing the knockout blow. Smith started the quarter with a 3-point shot, followed quickly by a steal and layup by Ruegg and another steal and layup by Robinson. The Knights looked to stop the run by hitting a three-point shot, but the Dons responded with another pick-and-roll hook-up between Smith and Davis for two, and back-to-back threes from Smith. Senior Derek Kotarba finished the second-quarter scoring with a layup to close the half with the Dons leading 28-19.

The Dons were unable to hold the momentum in the third, mustering just five points while conceding eleven. While scoring was scarce, Davis displayed a nifty power drop-step and finish with his left hand, while sophomore big man Tyler Murphy displayed a soft touch with a high floater off the glass from the right. 36-33 Knights at the end of three.

In the fourth, the Dons quickly regained the lead with a third pick-and-roll between Smith and Davis and a baseline jumper from junior Noah Bloch. The Knights responded with four straight points to take a three-point lead, but Senior Jackson Aris-Dumas was fouled while hitting a floater from the left and converted the three-point play the old-fashioned way to knot the game 40-40 with three minutes remaining.

The next two minutes was a defensive stalemate, as neither team could find an offensive advantage. The Dons broke the drought with a free throw from Smith to take a 41-40 lead with 49 seconds to go. It appeared the Dons defense would do the job, as the Knights were unable to get the look they wanted and settled on a deep shot from their senior center at the end of the shot clock. Nothing but net. The Dons took possession trailing two with twelve seconds remaining but couldn’t convert. A loose ball out-of-bounds gave the Dons a final chance to inbound with 1 second left, but the final attempt was just off as the horn blew.

Thank you Dons for a fun season.