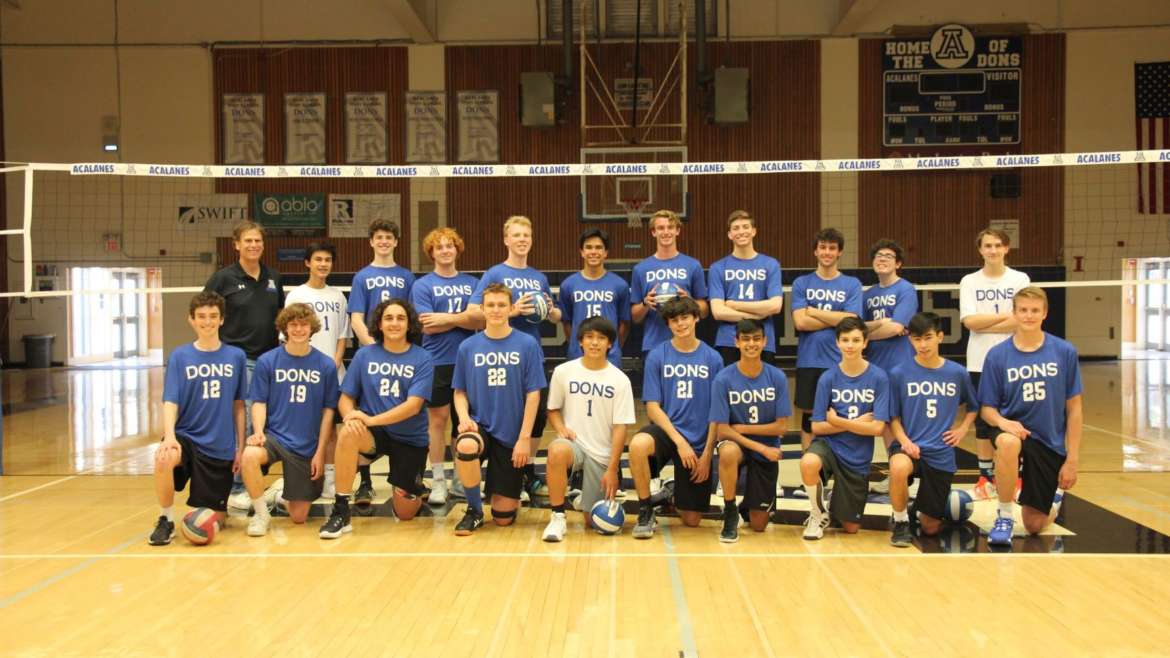 The Dons end the season with two shutout victories

The varsity boys volleyball team, with several guest JV players in tow, traveled to Miramonte to face the Matadors on their home court.  The Dons took all three games convincingly and showed their synergy on the court.

Several serving runs from Erik Moen, Austin Kinnear, Harry Mannering, Tommy Bieker and Gavin Zylstra made it difficult for the Mats to make a concerted effort in game one.  In game two, the Dons were caught by surprise as they went down 5-0 quickly.  This deficit did not last long as the Dons put together several scoring runs on strong back row passing with spot on setting from Erik, to set up some of the Don’s plays featuring kills from Austin, Harry, Grant Silveri, Tommy and Liam Bodner.  In game 3, with several substitutions, that cleared the bench, the Dons still took the third and final game convincingly. Strong setting from Victor Nikolacakis and hitting from Misha Stewart complemented the team with some key points.  Tyler Singh once again displayed his dangerous serve, racking up key points late in the game.

With a larger than normal crowd, and a full bench, featuring both JV and varsity teams in attendance, the Dons took the court for the last time during the more than interesting 2021 season.  This match also featured the final time we would see our three seniors on our home court – Gavin Zylstra, Harry Mannering and Austin Kinnear.

In game 1, the Dons got off to a slow start with multiple missed serves right out of the gate, and so the Knights took an early lead – which did not last long.  The Dons put together a string of points on Erik Moen’s serving of 7 straight, which was followed by more serving runs and unstoppable play set up by Erik to front row hitters – Austin Kinnear, Tommy Bieker, and Gavin Zylstra; with timely blocks from Liam Bodner, Austin, Harry and Tommy.  Back row passing was also impeccable.  Game 1 was over before we knew it.

In game 2, the Dons went out to a commanding lead of 11-1, and forced Los Lomas to take their 2nd time out of the game. The Knights came back stronger with good blocking and aggressive play that made the game closer.  However, once the Dons got side-out, they put some of their signature plays to work, and quickly put the game out of reach.

With the seniors in for the duration, game 3 brought in several guest JV players, and the team continued to control the pace of the game.  Victor and Erik teamed up with more bullseye setting to Austin, Harry and Gavin, who kept pounding kills on the Knights. The Knights stayed strong and kept the game close for a while, but this game was to get away from them as well. One of the highlights of game three featured DS/Libero Cole Regan. He came in to back row for middle Liam Bodner, but continued on to the front row, where he logged his first kill – to the utter enjoyment of the spectators and bench.  Late in game 3, each player was recognized for their contributions to the program over the past four years, and were met with standing ovations from the bench and bleachers as they left the game.  The announcer accentuated their exit, as they stepped off the court for the last time in their high school careers.

Great season Dons.  To Austin, Harry and Gavin – thank for all you did for this season and the program during your time here!