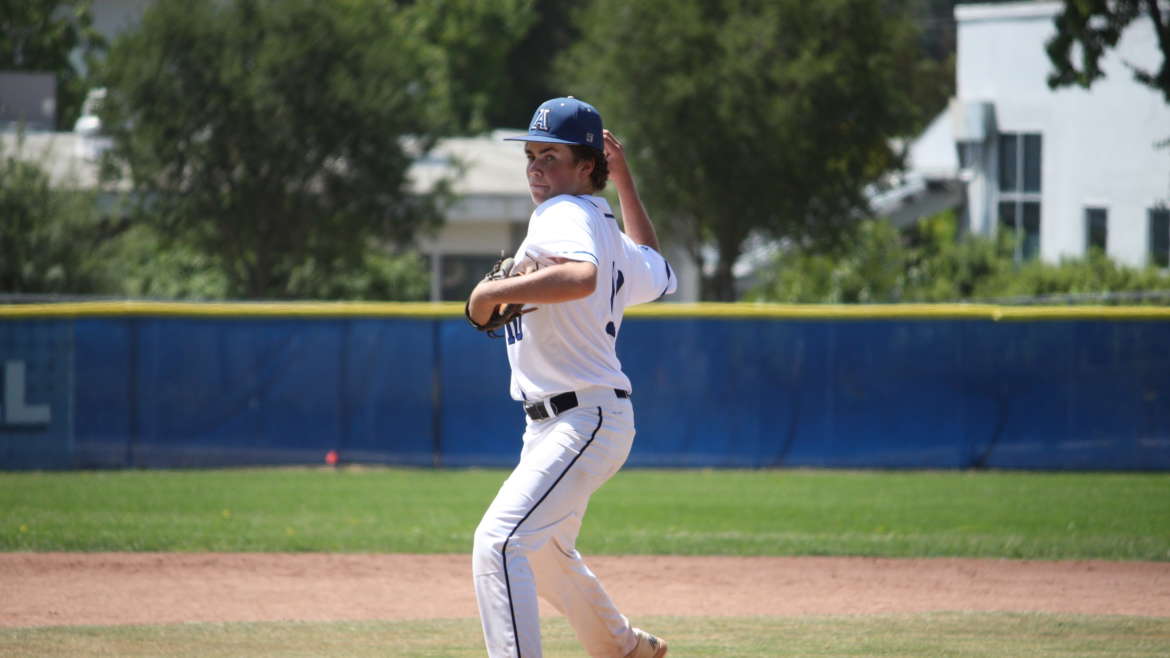 On a chilly Saturday that may have set the record for the coldest season-ending game, Freshmen Dons were hosting a familiar opponent: this was the third DH against Northgate Broncos this season.

Game 1
The game started off with the bats being quiet on both sides, the cold weather likely having an impact on the hitters.  Dons got on the board in the 3rd: Aidan Yates reached on a dropped 3rd strike, Will Ellerbrock singled, and both scored on Everett Glass’ grounder that was airmailed past 1B.  After another quiet inning, Dons broke it open in the 5th.  Peter Thorn and Aidan led off with singles, Mason got beaned, and with the bases loaded, Everett hit a rocket into the left-center gap, scoring two.  Jack Giorgianni piled on with a double down the 3B line, scoring Mason.  Brady Morrow then chased the starter off the mound with another hard-hit flyball that went for a double, scoring two more, and them himself scoring on a passed ball.  Up 8, Dons didn’t need any more offense, because their pitchers were flat out dominating.  Mason got the start, Everett stepped in to close the game out, and together they combined for a shutout gem.  Mason scattered 3 hits and 2 walks over 5 innings, striking out 5.  Everett threw 2 innings of shut-down ball, yielding a single hit and no walks, with 3 Ks.  In contrast with many prior outings, Dons defense was rock-solid, committing a single error that did no harm and taking away almost everything that got put in play.  Dons offense was very balanced: Everett, Jack Giorgianni, Brady, Kiran, Peter, Aiden, and Will each had a hit.  Everett and Brady led the way with 2 RBIs apiece.  Dons 8, Northgate 0.

Game 2
The second game had an even slower start offensively.  Both starting pitchers were crafty, and the Northgate hurler used his off-speed stuff effectively to keep Dons off-balance, eliciting lots of grounders.  Dons were still scratching out runs though, with some help from shaky Broncos defense.  Dons got on the board in the 1st when Mason walked, and scored on an infield pop-up from Brady that went through a hold in the 3B’s glove.  In the 3rd, Everett singled, stole 2nd, advanced on a passed ball, and scored on another one.  In the 4th, Don finally got one the old-fashioned way, with an RBI base hit: Aleksey Volobuev singled, moved up to 3rd on a steal and a passed ball, and then Peter hit a laser beam to the center to score Aleksey.   And then the floodgates opened in the 6th.  Jack Giorgianni, Brady, and Aleksey drew walks to load ’em up, and with a new pitcher on the mound, Peter hit another hard grounder that went through, scoring two.  Another pitching change followed, and again brought no relief: Aiden, Will, and Mason had base hits, with Will’s going for a double (Will ended up on 3rd advancing on a bad throw, and could have easily scored had it not been for the ball bouncing into Dons dugout).  Dons ended up batting around in the inning, scoring 5 runs in all.  Once again, the 8-run lead was enough, because once again Dons pitchers were firmly in control.  Jack Giorgianni started, and threw 5 scoreless innings, yielding 5 hits and 1 walk while striking out 7.  Peter Thorn pitched in relief, and delivered two more innings, combining for the second shut-out beauty of the day.  Dons defense was suffocating again, with no errors and many outstanding plays, highlighted by Will’s running catch of a looong flyball down the RF line that seemed certain to fall for an RBI and extra bases.  Dons offense was again balanced and efficient, with production up and down the entire lineup, with 8 runs being scored on 7 base hits and 6 RBIs.  Peter led the way with 2 hits (and 3 RBIs), and Mason, Everett, Aleksey, Aiden, and Will each had a hit.  7 different players crossed the home plate, with Aleksey scoring twice.
The Dons’ stellar season ended with Mason at SS throwing out a runner at 1st (for the 6th time in the game), and the scoreboard showing the familiar 8-0 score.

The overall season tally stands at 9 wins and 4 losses.  Congratulations Dons on a great freshman season!