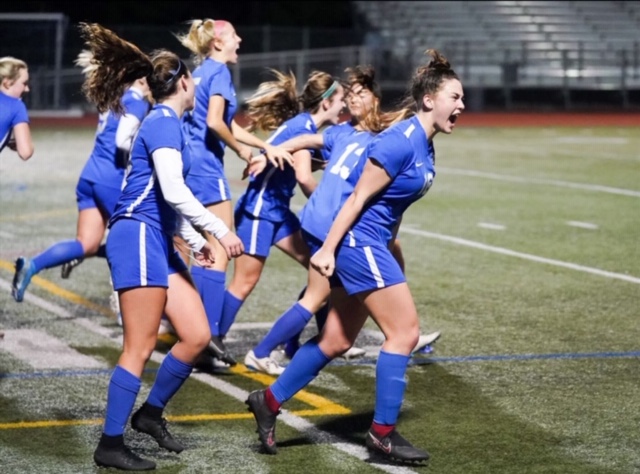 On Wednesday night, the Girls Varsity Soccer team took on Petaluma in the Semifinals of NCS. The last time Acalanes made it to the Semifinals was back in 2014. The Dons were ready and eager to play, as they had learned that their cross-town rival, Miramonte, had fallen 5-0 to the #1 seed Branson earlier that afternoon. However, their focus was on getting past Petaluma.

Solid start for the Dons during the first half. Intense defense and crisp passing gave the Dons a few chances to score, and the defense kept Petaluma at bay. Around the 23 minute mark, Maile Broad had just entered the game. The Dons gained possession on their offensive half of the field. Addie Bailey crosses the ball to the center, Beth Daughters then dishes it to Maile for the goal! Dons up 1-0.

Several minutes later, the Dons come roaring back. Sami Hansen made a stop in the center on defense to gain possession. She passes to Ivy Souza in the midfield. Ivy turns upfield to pass it to Dylan Hagglund, flying up the left side from the backfield. Dylan finds Tatum Zuber on the wing. Tatum makes a beautiful, high cross to Addie Bailey in the center. Addie is able to get the ball around the goalkeeper. BOOM! Goal! An absolutely incredible sequence of teamwork. Dons up 2-0.

With about 5 minutes remaining in the first half, a foul was committed on Petaluma at around the 50-yard line. Aliye Wingate is set to take the free-kick. The Dons are lined up by the left side of the goal. And what does she do? Makes a stellar high kick where Tatum Zuber is, in perfect position, to bang the ball into the back of the net to give the Dons a comfortable 3-0 lead to go into the half.

The Dons came out fired up in the second half. They were tasting victory with a 3-0 lead. Play defense and they got this. They had several shots on goal and were connecting their passes. The defensive backline was gritty and tough. But Petaluma wasn’t giving up that easily. With about 15 minutes remaining in the game, they were able to score on a corner kick to make it 3-1. The feel of the game changed immediately. A two-goal lead isn’t as comfortable as a three-goal lead. Petaluma kept pressing, but the Dons would not relent. Game over! Dons WIN!

The Varsity Girls Soccer team, for the first time in Acalanes history, advances to the NCS Finals! History was made Wednesday night! They will face the #1 seed Branson of Ross at a neutral location, San Rafael High School at 7pm on Saturday night. This team is so special. They are gelling at the right time and are playing exceptionally well together. They can do this!

We would like to acknowledge our Varsity Boys soccer team on an outstanding season. To watch you all play is awe-inspiring!

Again, thank you to all that came out to support the girls last night. It truly means so much! #donsshowup #donsfamily