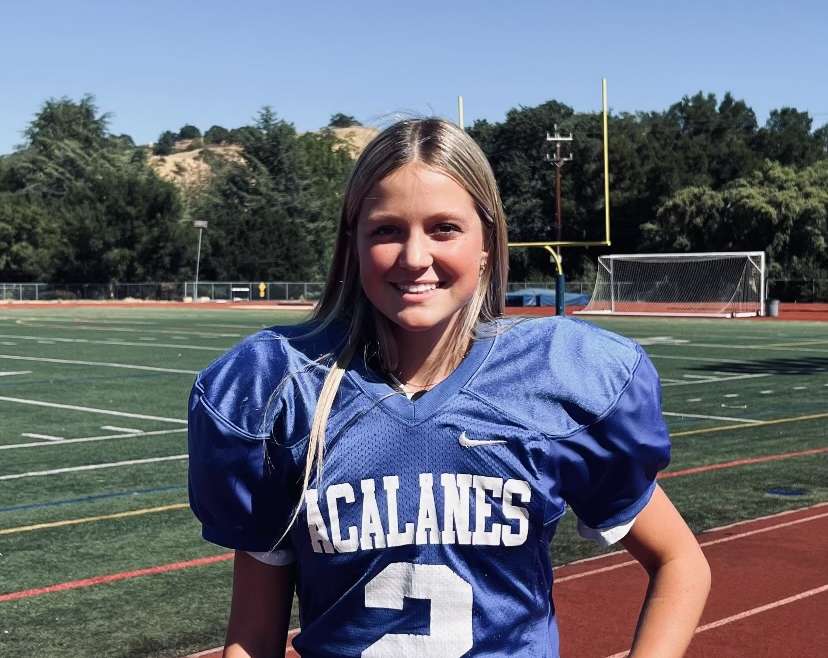 Little by little, an increasing number of girls in the USA are breaking through invisible barriers of perhaps the most traditionally male-dominated sport, football.  In assuming key roles kicking for their school’s football team, they’re blazing trails for the young women behind them.  In 1997, Christal Cook was the first girl to play on her high school’s football team. She was a guard and lineman on the freshman football team at Central High School in Bridgeport, CT.

Currently, there are almost 2000 high school female athletes playing football in the USA this fall. This year the Dons have 141 players in the Acalanes football program on three teams and the Dons are proud to have Lucca DeBiasse on the JV team. She is the first female athlete to play football for the Dons.

Lucca is a multi-sport athlete, soccer, lacrosse and now football, shares her JV football and Lacrosse Coach Bill Fraser, she started kicking footballs with her brother and dad several years ago. Intending to go to Campo, she worked out with their freshmen last summer.  However, feeling the pull of “the blue,” she transferred to Acalanes. She decided this summer to commit to trying out for the placekicking job on the JV.  Those watching her kick so far know this is real. She is a friendly, terrific young person, and a great teammate in all of her sports.

What was your desire to play football?

How long have you been playing soccer?

I started playing soccer in kindergarten. In third grade, I moved to the club level. I currently play for Walnut Creek Surf.

Obviously, there is a big difference from soccer to football… what is the biggest difference?

The biggest difference for me is the equipment. Kicking with full pads and a helmet is taking some getting used to.

You are the first female Don to play football. How does that make you feel?

I didn’t realize I would be the first female to play football at Acalanes. I don’t have any strong feelings about it, but I’m excited to be a part of the team.

What do your parents think about you playing football?

They actually haven’t said too much about it. I think they wanted me to make the decision on my own on whether I joined the team or not without any influence from them.

Do you think more girls should play football?

I think if they have the desire to play football, being a girl shouldn’t hold them back. Go for it!

What is your personal motto?

Don’t let fear get in the way of trying new things.

Who is your biggest fan?

Outside of my family, I would have to say my lacrosse coaches, Steve and Bill.

How are your JV brothers embracing you to the team?

JV has a scrimmage game this weekend at ACAstadium on Saturday, August 20. Freshman will play at 3pm, followed by JV at 5pm and Varsity at 7pm.  Come see Lucca and the Dons this weekend warming up for their football season, which starts next week. Let’s Go DONS!