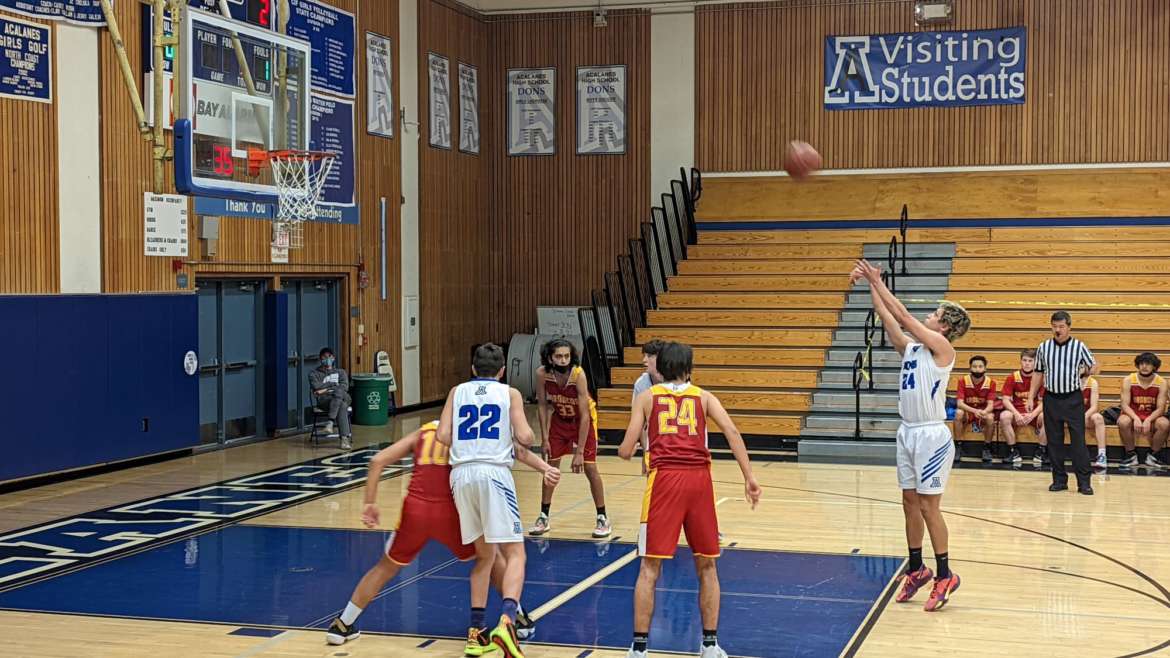 HIGHLIGHTS for this exciting game can be found at: http://www.hudl.com/v/2Gjhuy

The rosters looked slightly different than the last time these two teams met in the Semifinal Round of the Dougherty Valley Holiday Tournament where Northgate prevailed 51-37 behind six three’s from #10. The Dons had starters Braedon Christie and Nico Ortman back in the lineup but were missing Sam Bishop and Brody Darin while two of the best Northgate players were promoted to JV.

The Dons came roaring out of the gates in possibly their best quarter of basketball this season. Avyn Morales hit Braedon Christie on a beautiful give and go down the lane for the first Dons’ bucket. A couple possessions later Christie prevented a fast break layup with a huge block. Dylan Rocca scored next with a follow up little rainbow hook shot after a miss. Maddox Malm penetrated and dished it to a cutting Christie to put the Dons up 8-4 midway through the period. After a Northgate three narrowed the gap to one, the Dons dissected the half court trap nicely getting it into Drew McKenzie in the middle as he fed Malm for a sweet baseline jumper. We poured it on from there behind two McKenzie blocks, a Christie drive, and Rocca went full flamethrower mode hitting two back to back threes, one at the buzzer with the Dons up 18-7.

The block party continued to build momentum in the second as Miles Blackhart had a huge rejection on the first play. After a couple scoreless minutes, Morales had the only field goal in the second with a layup on an assist from Christie but missed the and-1. Meanwhile McKenzie was doing his best “Steiffel Tower” impersonation with four blocks in the half and countless rebounds. Points were hard to come by for either side and the Dons took a 21-10 lead into the locker room at half.

The scoring drought for both sides continued until three minutes into the quarter when Northgate broke the seal with a wide open corner three from #15. #44 hit a three on their next possession cutting the lead to five at 21-16. A Malm runner got the Dons on the board midway through the quarter, their first bucket in ten minutes of play. On the next possession, Malm found Ortman for a pretty three at the top of the key to put the Dons back up 26-17. The Broncos kept fighting back as #15 hit another corner three and #2 added a fast break layup to cut the lead to 26-22. Christie answered, taking advantage of a beautiful Ortman screen for an uncontested driving layup. #2 added a midrange jumper plus another fast break layup and the Dons clung to a one point lead 29-28 as we headed to the fourth.

The fourth quarter felt like it lasted an eternity! The Broncos took their first lead of the game 30-29 after #15 converted two free throws on a highly questionable call against Christie on what looked like a clean block from behind. A couple minutes later, Malm tipped a rebound to a wide open Morales to put the Dons back up 31-30. Ortman found Morales in the high post on the next play for an easy bucket off a quick dive to the hoop to put us up three as Northgate called timeout with five minutes to go. Ortman drew a huge charge out of the timeout but Northgate was able to close the gap to one on their next possession with an offensive rebound put back and-1 opportunity. Northgate missed the free throw and Rocca was fouled on the rebound as he headed to the line with ice in his veins to nail two huge free throws with the Broncos now in the bonus. Morales then barreled his way through two defenders for two more to put the Dons up 37-32 with a few minutes to go.

Northgate could feel it slipping away and turned up their defensive intensity, continuing to trap on almost every possession. Their overall activity led to a bucket off a pretty backdoor cut and another fast break layup to narrow the lead to one 37-36. The Dons responded with Malm saving an errant pass and feeding McKenzie who found a cutting Christie for a 39-36 lead with two to play. #15, who was “red hot” all night, picked up another offensive rebound and headed to the line for what looked like a pretty sure two points but one free throw was negated on a lane violation and the Dons were still up by two with a minute to go. Northgate forced a turnover with their trap but was unable to convert as Ortman and Christie teamed up for a huge block on #2 and #15 eventually turned the ball over on a carry. Ortman was all over the place in the fourth, playing tenacious D and coming up with five “Hustle Plays” per Coach Thomas.

With 27 seconds to go, the Dons broke the Broncos full court trap but Malm lost the handle on what would have been the nail in the coffin layup as several Broncos desperately came barreling towards him. The play resulted in a foul sending Northgate to the line with a chance to tie. #24 missed the front end of the 1-and-1 but the Broncos got the rebound and #24 was fouled again on a driving layup. He made the first as everyone started to hold their collective breaths. But the second free throw clanged off the rim and Christie grabbed a huge rebound for the Dons drawing a foul. Christie missed the free throw but got his own rebound then forced a quick shot as both teams wrestled for a jump ball on the miss…possession Broncos. With 8.5 seconds to go, Northgate rolled the ball out to half court where #2 picked it up and found our old nemesis #10 as they gave him a chance to be the hero. However, Rocca put on a defensive “Masterclass” slipping screens, cutting off baseline and forcing a tough entry pass that Malm batted away as time expired. Everyone could finally exhale as the the Dons were victorious 39-38 in a total thriller!

The Dons are now 1-1 in league play and 5-5 overall (.500). Next week we have a tripleheader with two tough games on the road and another one at home. We face Campolindo on Tuesday, January 18th at 4pm, College Park on Thursday, January 20th at 4pm, and host De La Salle on Saturday, January 22nd at 1pm.

Can’t make the game or want to watch the replay? No problem, we got you covered with a LIVE FEED for all HOME games: https://www.youtube.com/channel/UCOOfL1EEuKyvKSsKC7dduFw/featured