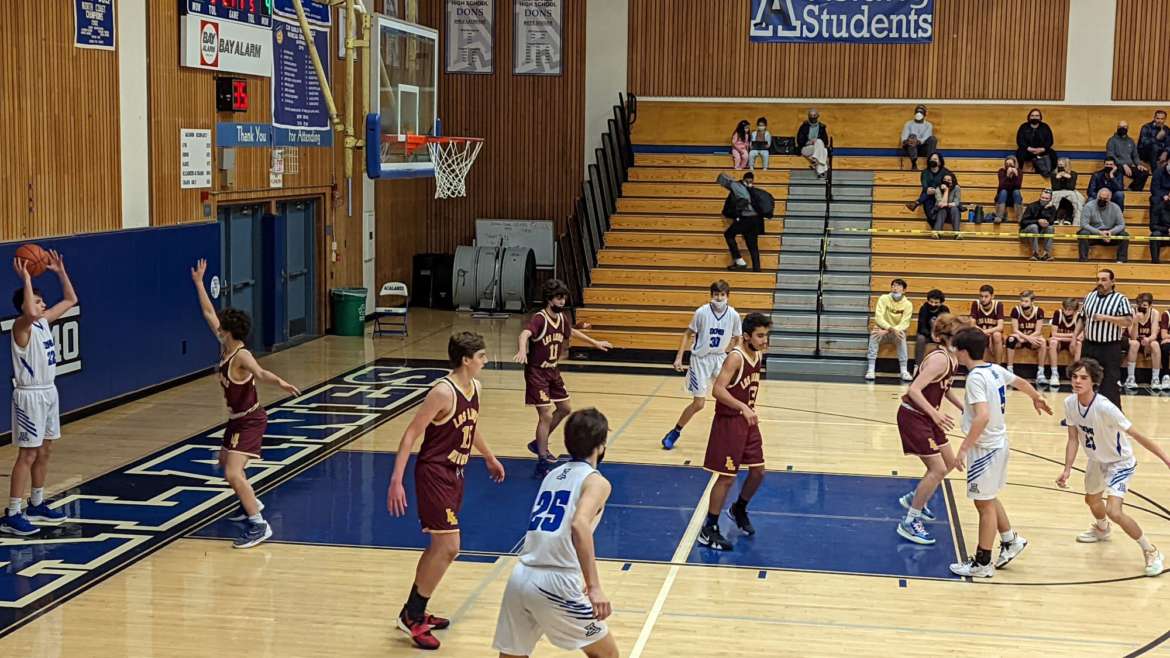 It was really nice to have the full squad back after the Holidays! The Boys left it all out on the floor but came up short in the fourth dropping a tough one to the Knights 58-48 in what was a very exciting and intense league opener.

Las Lomas got an easy layup right off the jump but Avyn Morales quickly answered. Joey (#33) added two buckets for the Knights while Braedon Christie started to assert himself on offense taking it strong to the hole and getting to the line twice converting 3 of 4 free throws. After a Sam Bishop three and Morales score in the post, the Dons were down 11-10. Joey, who had everything going for him in the first, scored 10 points including an uncalled bank three and the Dons found themselves down 19-10 headed into the second.

The Dons continued to chip away at the line getting into the bonus early with five minutes still left in the quarter as Nico Ortman made two from the stripe. Christie followed that up with a long two then an and-1 to bring the Dons within two 19-17. Las Lomas was actually held scoreless for the first six minutes of the quarter. Bishop turned it up on defense forcing a turnover and drawing a charge on consecutive possessions. A gorgeous Ortman to Christie to Morales connection at the end of the half left the Dons trailing 24-19 going into the break.

The Dons have been a better second half team all year and came roaring out of the locker room. Another Christie deep two and a Morales splash three put them down 25-24. Drew McKenzie poked it away on D as Christie picked up the loose ball and took it all the way for the Dons first lead 26-25. Morales hit a corner 3 to put the Dons up five at one point 30-25. Las Lomas started to right the ship and we were tied 30 all after they hit a three. Maddox Malm came off the bench late to hit another one from deep putting the Dons up 33-32. On another well orchestrated play to end a quarter, Bishop hit Morales for a finish inside plus the and-1 but he was unable to hit the free throw. We were tied 35 apiece headed into the final stanza.

The Knights really turned up the defensive pressure in the fourth, locking the Dons up in aggressive man defense, at times applying full court pressure and trapping often which forced many turnovers. Bishop hit a corner 3 that put the Dons up 38-37 but that was the last lead we would see. Another and-1 by Christie, who had his finest outing of the year, kept us close only down one at 42-41. The Knights caught fire as they connected on five three’s in the quarter and started to pull away. Jackson (#24) hit two corner three’s and corralled some big offensive rebounds. Both teams were gunning from deep and the Dons had three 3’s themselves including two late by Dylan Rocca but the Las Lomas D made it really tough to get good looks. We had a few three’s go in and out that could have really mattered in the end but came up a little short, falling 58-48.

The Dons were lead by Braedon Christie who finished with 16 points while Morales added 14, Bishop 7 and Rocca 6. The Knights were paced by Thomas (#15) with 16 points, Joey (#3) with 12 and Jackson (#24) with 8. Las Lomas outshot us from deep hitting on 8 three’s to our 6. There were no official free throw records for this affair but I believe it was our best showing at the line all year which was nice to see.

The Dons are 0-1 in league play and 4-5 overall on the season. Next game is currently scheduled for this Saturday, January 15th at Home against Northgate in a makeup game from last week. Time is currently set for 12:00pm but subject to change so please check your local listings. GO DONS!!!