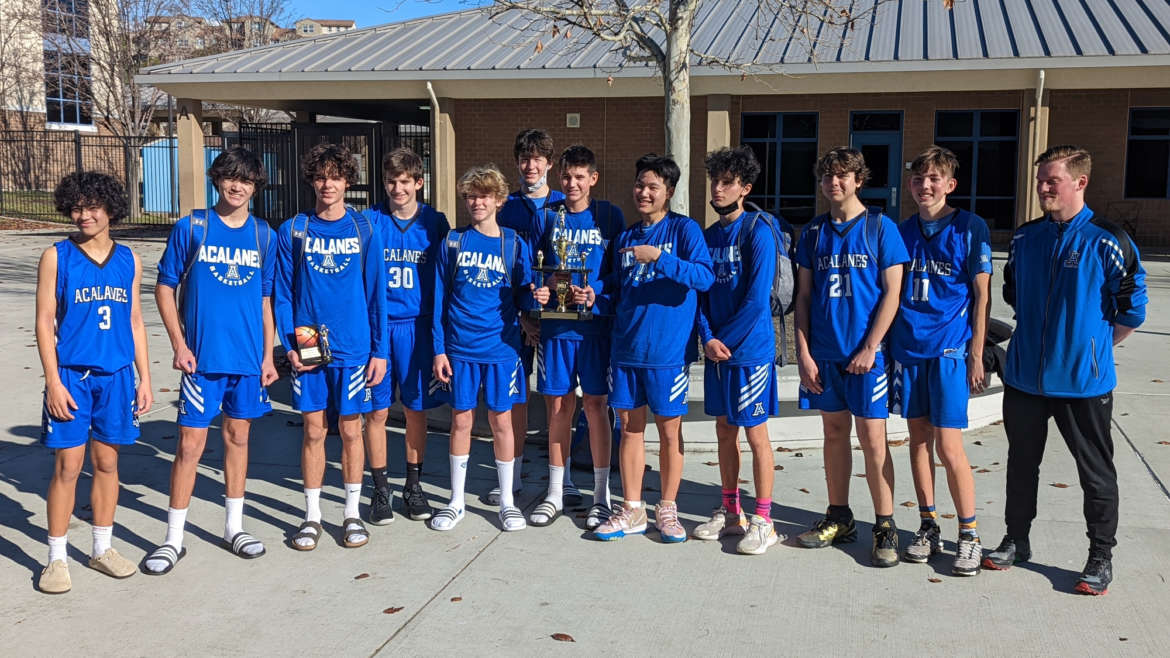 It wasn’t the prettiest game but the Dons took care of business against Irvington taking Third Place in the Silver Division of the eight team field at the Dougherty Valley Holiday Tournament. The referees made their quota and then some calling 28 total fouls and totally disrupting any flow to the game especially in the second half.

The Dons were hot right out of the gate as Maddox Malm hit a gorgeous three. Sam Bishop had it going early hitting two more three’s and Miles Blackhart added a free throw for a 10-0 lead. Irvington was ice cold and didn’t score at all until one minute left in the quarter. Bishop was able to dump the ball into Alex Saegert in the middle breaking down the Vikings zone for another bucket to give the Dons a 12-3 lead at the end of the first.

Saegert continued to attack the hoop in the second adding two free throws and another bucket on a dump into the middle. Blackhart started to assert himself on the glass. He was an absolute beast on the boards all day and unofficially had close to double digit rebounds. Dylan Rocca and Justin Tan three’s gave the Dons a 22-6 lead at the half as the Vikings struggled to put the ball in the hole.

Whistles started blowing right away as the second half started. Two quick fouls and three converted free throws later the Vikings had cut the lead to 22-9. Malm hit Bishop for an easy layup off an inbounds play to get the Dons on the board. After a Blackhart to Drew McKenzie connection down low, the Dons maintained a 28-11 lead. Saegert added another free throw and the Dons were up 29-15 going into the fourth.

Tan provided all the Dons offense in the fourth hitting another corner three and a follow up off the glass for a 34-20 advantage. The Vikings were making a living at the line and trimmed the lead to 10 after hitting 4 of 6 free throws. #21 added two late buckets but the Dons hung on for the 34-28 final.

The Dons are back to .500 (4-4) and open up league play next week with two home games. We will face Miramonte on Tuesday, January 4th and get a rematch against Northgate on Thursday, January 6th. Both games will start at 4:00 pm.

Have a safe and Happy New Year Everyone!