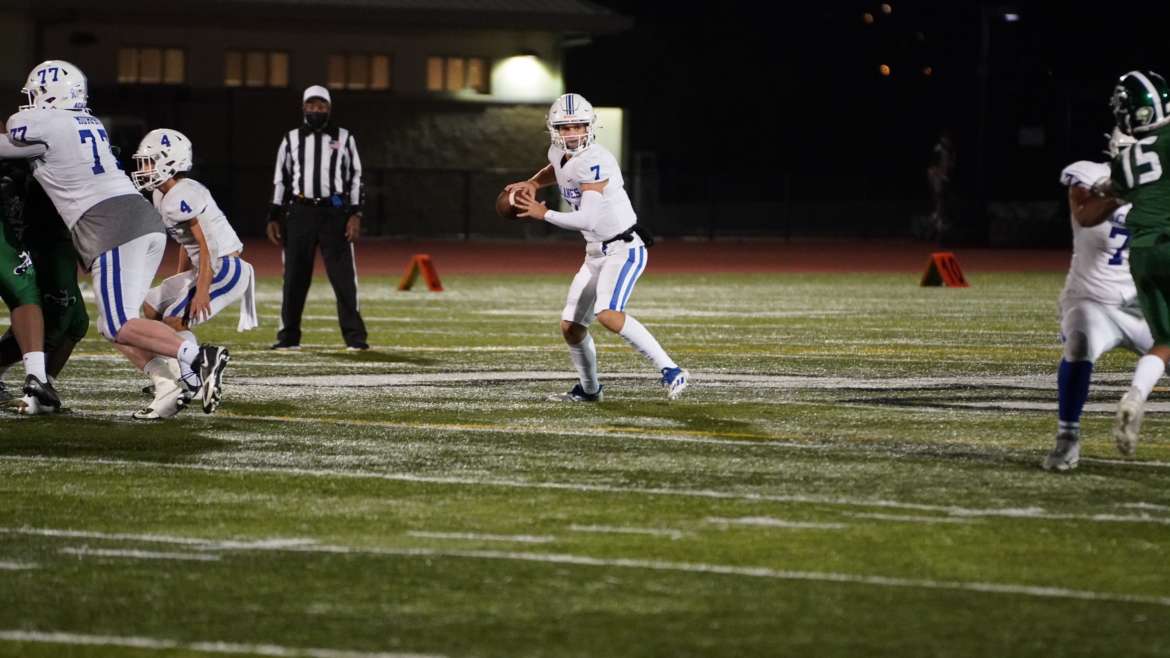 We’re thankful for our fantastic coaches, who give so much of their time, patience, and knowledge to the program. Who help our boys become young men.

We’re thankful for the Acalanes Boosters and the Acalanes Touchdown Club and especially for the hard-working volunteer board members who help make the whole experience of playing and watching our Dons that much more special.

We’re very thankful that we got to watch our boys play football this year. We’ll miss all of our seniors. Dono, Jake, Miles, Eli, Will, Trygg, Brady, Luke C, Jack, Nick, Ryan G, James, Sam, Ryan H, Logan, Michael, Flynn, Marshall, Evan, Connor M, RC, Devin, Dante, Patrick, Anthony, Connor O, Ibis, Ethan, Rhett, Charlie, Luke S, Connor S, Kyle, and Noah, but are so so thankful that they got a full season, and the chance to play in the playoffs. It was a short run, but like the rest of the season very exciting and hard-fought.

For the first game, the Dons were seeded 5 in NCS Division 3, and sent to play the number 4 seed, El Cerrito, at El Cerrito last week. The Dons’ initial possession was quick, as two incompletions and a short run by RB Evan Malmquist, forced a punt back to El Cerrito. It was then that the Gauchos unveiled their big weapon, #6, 6’3″ 250 lb RB/DT Antonio Hines. After five runs and a swing pass, he got into the end zone for the first score of the game. The extra point was missed on a bad snap, and it was El Cerrito 6, Acalanes 0.

Luckily, the Dons snapped to life after the El Cerrito score. After an initial incompletion, the Dons O-line started to grind. Two draws to Malmquist netted a couple of first downs, and then the passing game started to click. A quick out to WR Trevor Rogers, a flare pass to RB Ellis Burger, and another out to Rogers had the Dons moving downfield. A draw to Burger and an inside trap to Malmquist were followed by two connections between Souza and WR Dante Montgomery that got the Dons into striking position. Then on first and goal Malmquist followed a big hole opened by the O-line and in for a score. Sensing the opportunity to take an even bigger lead, the Dons ran a fake XP, but unfortunately, the pass attempt hung in the air for too long and El Cerrito picked it off. The score remained El Cerrito 6, Acalanes 6.

That wasn’t the only time the Dons would roll the dice in this game. On the ensuing kick-off, K Zach Murdin executed a perfect onside kick and the Dons had the ball once again. After their success on the ground in the last drive, Acalanes started to exert their will on the Gauchos. On the first play, they ran their bread and butter trap play with Tyler Murphy and Anthony Ortale blocking down and Marcus Julian pulling and kicking out the DE. A little hole is all Evan needs and he burst through for 15, and that was the end of the first quarter. The Dons rolled right into the 2nd with more of the same. This time Marcus and Michael Kuhner blocked down and Anthony and Tyler pulled clearing the way for another nine yards for Evan. El Cerrito knew it was coming but couldn’t stop it. Marcus pulls and traps, Evan scoots through for another 15. With goal to go now, why not keep it rolling? Tyler and Anthony clear the way one more time and Evan goes all the way to paydirt. This time the extra point is good, and it’s El Cerrito 6, Acalanes 13.

Now it was time for the Dons’ defense to bear down. El Cerrito had pounded the Dons in the first possession with their big back, and now they started to move down the field again. After stopping the initial two downs, a roughing the passer penalty gave El Cerrito new life at midfield. Another long run by big #6 then brought the Gauchos into Acalanes territory. That’s when the Don’s stepped up, DE Sam Hafner broke through the line on first down and dropped the El Cerrito RB for a 3-yard loss. Now faced with 2nd and long, the Gauchos tried to go to the air. CB James Gunn broke up a long pass on 2nd, S Devin Miniello came up on a flare that was incomplete, and on fourth down Gunn forced the Gaucho WR out of bounds, turning it back over to the Dons.

On offense again, the Dons started right back where they left off. Malmquist running for chunks of yardage off of draws and traps, mixed in with a quick cross to Trevor Rogers up the middle. Once the Gauchos were looking short, Souza hit WR Ethan Torres on a Stop and Go up the left sideline and into the end zone. The extra point was good and now it was El Cerrito 6, Acalanes 20.

With the Dons scoring seemingly with ease at this point, El Cerrito was getting desperate. After a few short runs, the Gauchos tested Acalanes deep and S Nick Eppinger was ready. He picked off a long pass deep in Don’s territory and brought it back all the way to the El Cerrito 30 yard line. It didn’t take long for the Dons to take advantage of the break. Once again they went to their bread and butter trap plays… Tyler and Anthony clear right for 5, then Marcus pulls left wipes out the DE, and Evan blasts through the hole for 25 yards and another running TD. This time the extra point was missed and it was El Cerrito 6, Acalanes 26.

With time running out in the first half, down 26-6, El Cerrito pulled out their trick play. A reverse pitch to #8 WR running left looked like a run but he reared back and fired a long pass down the field all the way to the four-yard line. Now with less than a minute left, the same #8 who threw the previous long bomb, rolled left, and lofted a pass to the corner of the end zone, it was bobbled and barely caught in bounds, but it counted. El Cerrito 13, Acalanes 26 at the half, and the Gauchos with a lot of momentum.

Acalanes tried another onside kick to start the second half, but unfortunately, it didn’t work and gave the Gauchos a short field. A few plays later, #8 took a Wildcat direct snap down the left sideline and it was El Cerrito 20, Acalanes 26. A muffed KO trapped Acalanes deep in their own territory and a few plays later a fumble gave the ball right back to El Cerrito. One play later, big #6 took the ball all the way in, and with the extra point, it was El Cerrito back on top, 27 to 26.

The Dons weren’t about to give up that easily and immediately started a march down the field. Completions to Torres, WR Will Berrien, and Malmquist brought Acalanes quickly back into El Cerrito territory. One more completion to Berrien got them closer, then Souza lofted a long rainbow to Montgomery down the sideline and the Dons had another TD. The two-point conversion was broken up at the last moment by the Gauchos and now it was El Cerrito 27, Acalanes 32.

Down by five now, the Gaucho’s plan was to hammer the Dons with their big back, but this time Acalanes was ready. Senior LB Logan Ketcham and DB Coco Gannon put a big hit on the NFL sized back and caused a fumble recovered by the Dons.

The momentum was now back with the Dons. A 20-yard completion to Berrien on a seam route and three straight runs by Malmquist had Acalanes with a 3rd and 2 on the El Cerrito 15 yard line. It was at that point that Malmquist had to go to the sideline for a cut hand. The ensuing run play lost four yards and the Dons were faced with a fourth down. With Malmquist still getting taped and unable to take his spot as the snapper, the attempt at a FG was unsuccessful and the ball went back to the Gauchos, along with all the momentum.

Two plays later #6 showed that he was not just big, but also fast. He broke a 71-yard run all the way down to the Dons’ 6-yard line. A few plays later he took it in for a score, and it was El Cerrito 34, Acalanes 32. Time was now running short in the game, and the Dons needed a score. Unfortunately, their next possession ended with three straight incompletions and an Acalanes punt. El Cerrito was able to milk the clock on their next drive, and even though their FG attempt was blocked, it left little time for the Dons to try to score. The last play was a Hail Mary that was intercepted by El Cerrito and returned for a meaningless TD. Final score El Cerrito 40, Acalanes 32.

A tough way to end it and very much a microcosm of the season. A tough, hard-fought battle with just a couple of bad breaks that didn’t go the Dons’ way. We’ll miss our seniors terribly but they left the program in great hands with several starters and players with starting experience coming back. On offense, Marcus, Victor, and Tyler along with Zach Robb on the offensive line, Ethan, Trevor, Andrew Habas, Paul Kuhner, Jake Takeuchi, and Ellis Burger in the backfield and at wideout. On defense, Tyler Worthington, Kyle Bielawski, Jack Giorgianni, Miller Smith, Nathan Bennett, Coco Gannon, Justin Zegarowski, George Churchill, and Nathan Kim. Those players along with the rest of the returning Juniors and a 7-2 JV squad chomping at the bit to contribute, and the future is looking bright for 2022. Only a few months until Spring Football! Go Dons!