JV Football Finishes Season with a Win, 23-0 with Only Playing Two Quarters 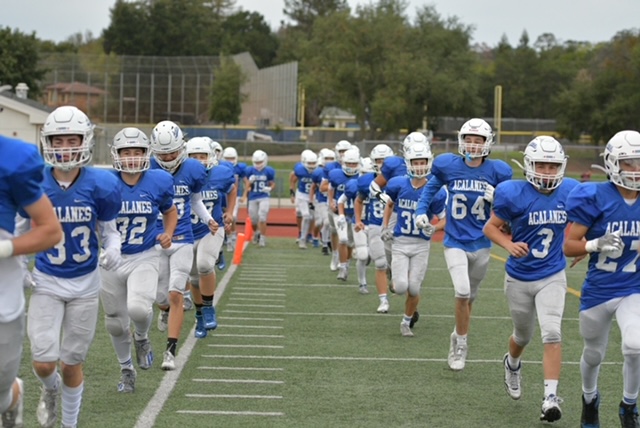 The JV Dons Football Team took on the Alhambra Bulldogs on Friday night and had an almost perfect game! There was some sort of transportation snafu with the Bulldogs bus, and they arrived 2 hours after they were supposed to be there, probably could have walked there in the amount of time we waited for them! After the JV team did there 3rd warm up session it was finally game time. A normal game became only two quarters of playing, as Varsity & Senior Night were in holding pattern for their night.

The Bulldogs won the toss, and that was about all they won all night! They chose to get the ball, which was smart because they knew there was not going to be a second half. They might as well take the ball instead of differing to the second half like most teams do… They were not able to do much offensively and went three plays and punted. The Dons offense on the other hand came out swinging for the fences, on the first or second play from scrimmage quarterback Jake Boselli connected with Freshman call up, Niko White, for a 42 Yard pass and touchdown! Very excited about Niko’s potential over the next 3 years!

When the Bulldogs got the ball back they again had trouble offensively, partly because the JV Dons defense, led by Gavin Bender, Marshall Anderson and Freshman Linebacker, David Roux, were just punishing the Alhambra offense – again the visiting team was only able to run 3 or 4 plays and then turned the ball over. This time the Dons offense was led by Southpaw Quarterback, Sully Bailey, who marched down the field and threw a 40 yard dime Mason Zirkel, who has come on strong the second half of the season as a big play maker! Our final possession of the game looked very similar to the first 2 possessions! Couple of running plays mixed in to the passing game, and then Jake Boselli made a nice play action fake and threw a dart to Gavin Bender streaking across the middle for a 3 yard touchdown! Boselli finished the game 7 for 11 passing for 102 yards and 3 touchdowns!

The Bulldogs got the ball one final time before halftime and again had trouble… on their first play the exchange from center to quarterback flew over the head of the QB, who picked it up in the end zone and tried to salvage the play – but the Dons defense was swarming to the Ball like a bunch of crazy bee’s. Outside linebacker Collin Malmquist got to the QB first, followed by Marshall Anderson, they tackled him in the End Zone for a Safety right at the buzzer for halftime – 23-0 JV Dons. Again, the Bulldogs were so late getting to the game the JV contest was limited to 1 half… disappointing to our players for sure – but a great way to cap off a great season!

Number of Shut out wins = 6!
The JV Dons outscored their combined opponents 315 – 95

Calvin Kotarba had 16 catches for 231 yards and 2 touchdownsScoring Leader – Ace Reeder with 2 touchdowns and 21 extra points and 1 field goal!

On the defensive side of the ball:

Gavin Bender had 23 tackles with 16 solo

Tackles for a loss of yards –  Gavin Bender had 11

Ace Reeder, Aidan Yates and Chase Caicedo each had 5.5