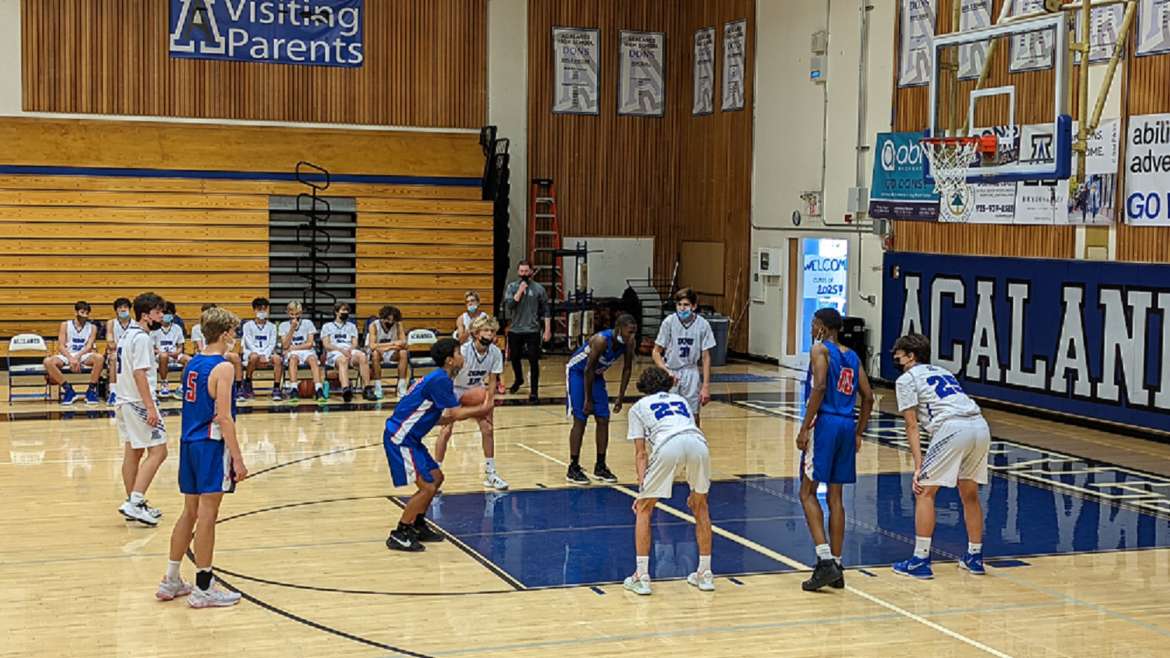 It was an epic back and forth battle throughout but the Dons came up a point short in their Season Opener.

The scoring opened with a beautiful dish from Braedon Christie to Avyn Morales on the first play of the game. After that Tamalpais frustrated the Dons with their half court trap which led to a 10-14 first quarter deficit.

Still down 17-21 with about four minutes to play in the second, the Dons came to life behind back to back threes from Dylan Rocca and Nico Ortman putting them up 25-23. A marvelous Rocca runner put the Dons ahead 28-25 going into the half.

Morales showed off some of his post game early in the third with a nice hook on one play and then put his defender in the popcorn machine on another play minutes later giving the Dons a 33-28 advantage. However, Tamalpais came storming back tying it up 33 all before Rocca stepped up again with two huge buckets giving Acalanes a 41-38 lead headed into the fourth.

Christie opened the fourth with a fast break layup to push the lead to 5 but things quickly tightened up from there for the Dons and they actually fell behind 45-50 with just minutes to play. Morales would not go quietly into the night scoring back to back buckets including a three to tie the game at 50 a piece with 55 seconds remaining. #23 Tae on Tamalpais, who finished with a game high 23 points, answered with a lethal step back 3. The Dons had multiple chances to tie in the waning seconds but couldn’t connect and ended up throwing the ball away forcing them to foul. After Tamalpais made one of two, Sam Bishop hit a three at the buzzer for your final 53-54.

Morales was a force to be reckoned with on both ends of the floor and finished with a team high 16 along with many boards and several big blocks. Rocca was a major catalyst finishing with 14 while Ortman had 8 and Bishop 7. The Dons finished 6 for 13 (46%) from the stripe while Tamaplais was 15 for 24 (63%).

This looked like a different team than we saw in the first two preseason games. The ball movement was vastly improved and there were several set plays that seemed to work flawlessly. Looking forward to an exciting season from Coach Eric Thomas and the Boys!

FOOD FOR THOUGHT: If the Boys are supposed to wear masks when playing (which they have at all times), why isn’t the other team supposed to as well? All three games we have played the other team has not worn masks at all and no one seems to be enforcing it. This Reporter’s personal opinion…it’s a competitive disadvantage and it makes no sense if both teams don’t have to comply.