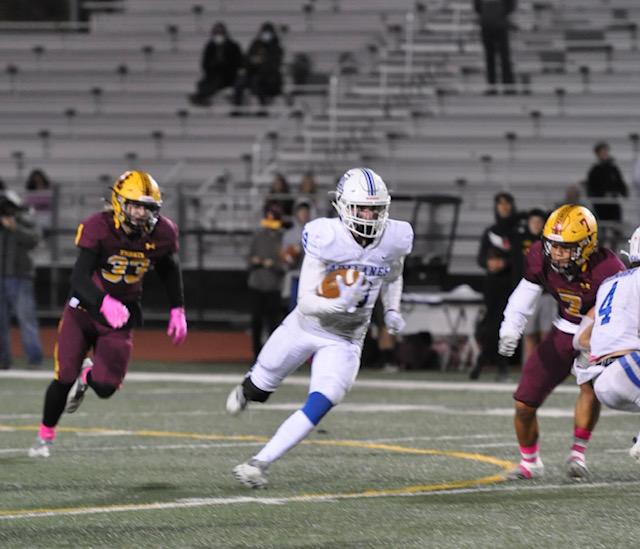 There are so many great quotes on losing: You can’t win unless you learn how to lose or Losing isn’t always the end, sometimes it becomes the beginning or I’ve learned that something constructive comes from every defeat. But losing by one little point, in the very intense end of the game , the only quote is Ouch!

The Varsity Don’s Football played a very tough game against the Las Lomas Knights in Walnut Creek, on Friday night. Things started out much like they always do for the Dons, Quarterback Luke Souza hit Slot Receiver Dante Montgomery in stride for a 46 yard touchdown and took an early lead 7 – 0. However, the Knights struck back to even it up 7- 7.

On their next possession the Dons offense struggled, and they were forced to punt the ball back to Las Lomas, punting is not something this team is used to doing. The Knights then drove the ball ball down field and scored again, 14-7 Knights. The two teams defense both stepped up and stopped the opposing offenses, however when the Knights were punting back to the Dons the high kick was mishandled by our return man, and the knights recovered inside the red zone, and with just a few minutes left in the first half the Knights scored a third touchdown of the game taking the score to 21- 7 Knights at halftime.

The Dons got the ball first to start the second half and promptly drove the ball down the field, mixing up the run and passing game with great efficiency. Running Back, Evan Malmquist, took the ball right up the middle for a 21 yard sprint to the end zone to close the score gap to 21 – 14. The Knights responded with a touchdown of their own to take it back to a two touchdown lead again, but at this point is was obvious the Dons were not going to roll over, and the Knights started to look a little winded.

The Dons took the kickoff and marched down the field again, and after a couple of long 3rd down conversions, Malmquist scored his second touchdown of the game with a 10 yard run. 28 – 21. The Dons started taking chances on Defense looking for the big stop as time was running thin, but they could not find the right answer to stop the Knights Offense, and they scored again, taking the score to 35-21.

At this point there is only 5 minutes let in the game, and the Dons need to score twice just to tie it up.. The Dons went to a hurry up offense, which is pretty typical for them, so they are used to moving quickly. Souza spread the ball around to several different receivers, and the run game was still proving effective – Souza finished the contest with 30 completions of 47 attempts for 297 yards. After a couple of quick sideline routes the Dons were back in the RedZone. Malmquist took another run up the middle to pay dirt, closing the score to 35 to 28.

There was only 1:45 left in the game at this point, but the Dons had all 3 time outs left. The defense, lead by Sam Hafner and Ryan Giorgianni stuffed the Knights to a 4 and out, including a huge stop on 4th and short, which got the entire team believing they could still pull this off. With about a minute left in the game Souza lead the Dons down the field, hitting Will Berrien for a quick out, and before the Knights knew it the Dons were back in the Red Zone. With 25 ticks left on the clock Souza hit Montgomery in the flats, and with a nice move, and some great downfield blocking by Junior Receiver, Trevor Rogers, Montgomery broke loose and scored his 2nd touchdown of the game to bring the score to 34-35 for the Knights.

Give Coach Burnsed a chance to win vs. a tie, and he opts to go for the win! The Dons offense stayed on the field and lined up to go for the 2 point conversation and a chance to take the lead in the final seconds. Souza took the snap from center and made a nice play fake to Malmquist up the middle, and then dropped back to pass, looking to his right. With his first receiver covered he had to scramble to his right, and saw Junior Receiver, Andrew Habas open in the back of the end zone, so he let it fly…. time seemed to stop for the few seconds the ball was in the air. In the end, the Knights defensive back made a play and prevented the ball from being caught, and the pass fell to the turf, incomplete. 35- 34.

But the Dons never give up! They lined up for the kickoff with 15 seconds left on the clock. Place kicker, Zach Murden, laid down a perfect onside kick that took a perfect bounce right into the hands of Ben Foox, and just like that the offense was back on the field! The Dons knew they had time for 1 or 2 plays at the most, and would need to be able to get out of bounds to stop the clock. Trevor Rogers got open and Souza placed the ball right in his lap for a 20 yard gain and a few seconds left. With the Ball on about the 30 yard line coach Burnsed marched the kicking team out for a 40 yard field goal attempt for the win. Rhett Skvarna, who was a perfect 4 for 4 on extra points for the game – lined up for what would have been a personal record – The kick was up, down the middle… but fell short by about 4 yards.. game over. The Dons lost 34-35, such a heartbreak!

Acalanes Highlights-Here is a look at some of the stats for the game: 466 total offensive yards, 5 Touchdowns, 169 Yards Rushing, 297 Yards Passing, 22 Different Dons made tackles, 1 Interception, 1 Fumble Recovery and one team that never quits! Fear the Blue!

The Dons will dust themselves off and will be completely focused on this Friday night’s game vs cross town rival Campolindo – Kickoff is at 7:00 pm at Acalanes Stadium. FEAR THE BLUE!