JV Football Does it Again, 41 Dons-Knights 0 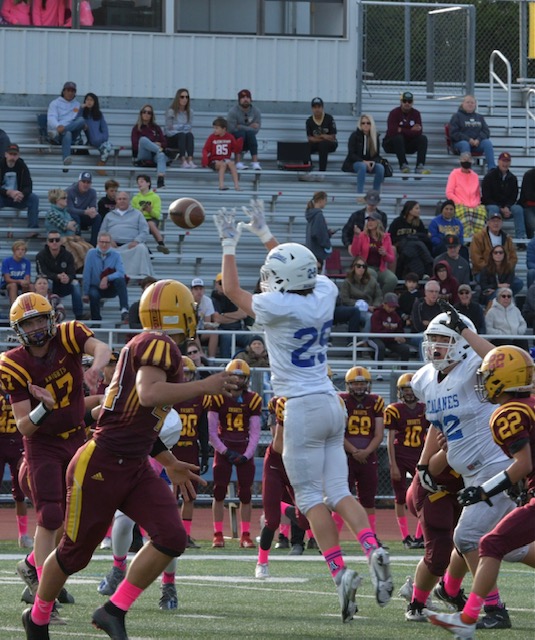 The JV Don’s Football team was in action on Friday vs the Knights of Las Lomas. The 10 min car ride from Acalanes to the home team’s stadium in Walnut Creek took longer than it did for the Don’s to put away the Knights! Mason Zirkel took the opening kickoff 85 yards for a touchdown to start the game, and with only 12 seconds off the clock the game was won! Oh wait – we still have 39 minutes left to play!

The JV Don’s had a lot of action left, and on their next possession Quarterback Jake Boselli, who was 4 for 9 for 126 yards passing, hit Paul Kuhner for a 70 yard catch and run. Kuhner has explosive speed that must be hard for opposing teams to see in the film, as they get to prepare for these games. Every week it seems like he breaks past and gets behind the defensive backs for a long TD pass. One would think that teams would figure this out, and try something different to defend him. it’s hard to stop a freight train.

On their next possession the JV Don’s went to the ground game and grind’ed out a nice drive, capped off by Quarterback Sully Bailey run around the end for a 3 yard scamper, and another Don’s Touchdown. At the end of the first quarter the score was good guys 20 – other guys 0! After half time the JV Don’s scored on a 33 yard pass from Sully Bailey to Paul Kuhner. Paul finished the contest with 3 receptions for 134 yards, he also had 2 rushes for 22 yards and a punt return (A busy afternoon for the speedster – 163 All purpose yards). When the Don’s got the ball back they went to the ground game again, to take some time off the clock. They matriculated the ball down the field and Jack Miller saw pay dirt after a powerful 5 yard run. With only 5 minutes left in the game everyone thought that would probably do it for the Don’s scoring efforts… but wait there’s more. The Knight’s faced a 4th down and long, deep in their own territory and decided to punt to finish off the game, or so they hoped. The punt effort was blocked by Aiden Yates, who then picked up the loose ball and ran into the End Zone for the games final score, 41 – 0 Dons! (Better ‘Yates’ than Never!)

The JV Don’s defense dominated the Las Lomas offense all afternoon. The Knights JV team must not have figured out the same recruiting techniques that their Varsity team has… because they could not figure out how to move the ball with any success against the Dons , only managing 84 total offensive yards on 46 plays, despite having the ball for 23 of the 40 min contest. Marshal Anderson had a monster game on Friday, racking up 8 solo tackles and 2 assists – which included a tackle for a loss of yards! Ace Reeder also flexed on the the Knights with 3 solo tackles and 2 assists. Gavin Bender was wreaking havoc all afternoon as well – forcing the Knights to do things they were not planning to do, and disrupting their rhythm continuously. The JV Dons defense took the ball away 5 times during the game – 4 fumble recovery’s, 1 by Brady Morrow, 1 by Sully Bailey and 1 for Ben Brekke, and the Yates blocked punt. They also had 1 interception, Kiran Foster picked off a Knights pass on the 5 yard line that put an end to the closest any team has come to scoring on this team all season.

JV Dons will be gearing up and fine tuning their ‘Fear the Blue‘ engine. As they rev-up to face Campoliindo. Kick off is 4:30 at Acalanes High School Stadium. Come on out and cheer on your undefeated Dons!