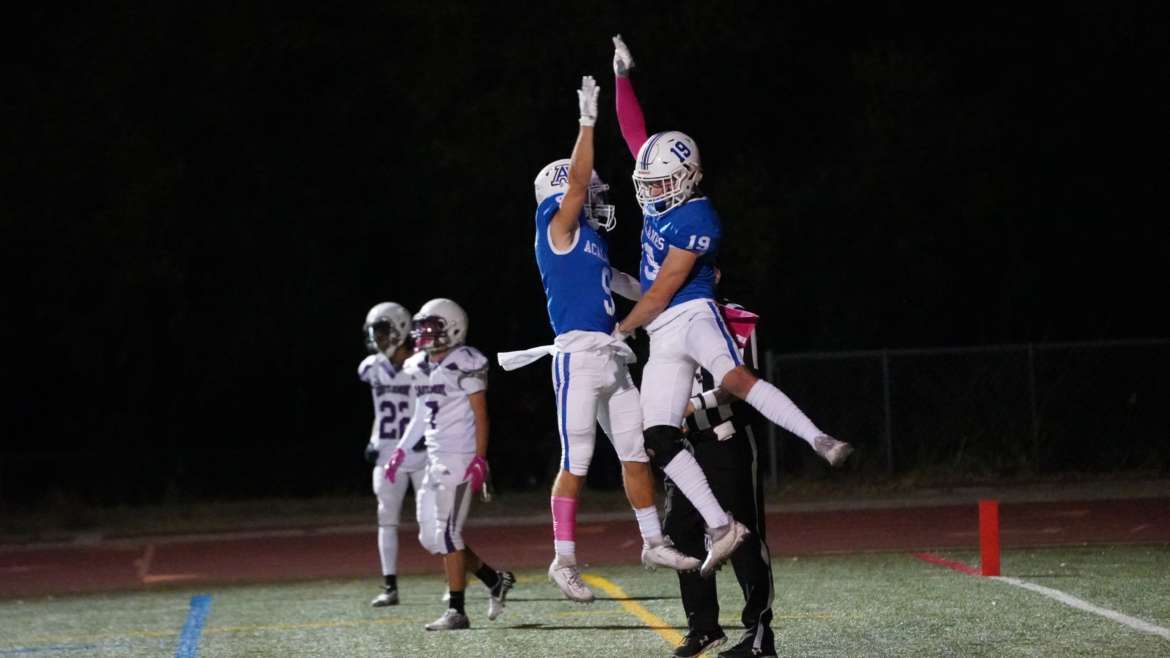 After a tough late-game loss to Damonte Ranch, the Dons Football team came out of their BYE week with purpose and the whole ACA community behind them. The team was fired up and ready to go, facing the Castlemont Knights from the OAL league with the stands packed to capacity and the homecoming crowd whipped into a frenzy.

After a short kick-off, the Dons started out near midfield in a flexbone formation with RB Evan Malmquist as the Deep FB, and Connor McPhail and Ellis Burger as the two wide HBs bracketing QB Luke Souza. Two running plays netted a loss of 2 yards and on third down and 12, the Dons switched back to their more familiar spread 10 personnel (one RB & no TEs) with trips to the left. Souza proceeded to hit WR Dante Montgomery on a quick 13 yard out for a first down, and order was restored. On the very next play, WR Will Berrien broke open on a dig route up the middle and Souza hit him in stride for a 51-yard TD. The extra point was low and blocked, making it Dons 6, Knights 0.

After the Acalanes defense held Castlemont on three downs, a bad snap on 4th down gave the Dons a very short field at the Knights 20. On the very next play, Souza hit Berrien again on a fade to the left corner of the end zone for the score. A low snap on the extra point caused a scramble, but Souza was able to roll right and find Berrien once again to complete the two-point conversion making it Dons 14, Knights 0.

On the next Castlemont possession they were able to get a first and move into Dons territory but a spin move and solo tackle by DT Anthony Ortale on third down, and an incomplete pass on 4th, gave the ball back to Acalanes near midfield. Once they had the ball back, the Dons wasted no time in scoring again. The O-line, RT Michael Kuhner, RG Marcus Julian, C Victor Nicolacakis, LG Tyler Murphy, and LT Ortale, held their blocks beautifully on a sprint draw to RB Evan Malmquist, and he did the rest, veering left then cutting back sharply to the right and out sprinting the Castlemont DBs all the way for a 54-yard run to pay dirt. The extra point made it Dons 21, Knights 0.

On their next possession, the Castlemont offense started to gain some momentum. Through a mix of run and pass, they managed to drive all the way down to the Acalanes 20 yard line before the defense stiffened. Some key tackles, a bad snap, and a grounding penalty drove the Knights back to the 40 and forced them to punt the ball back to the Dons. It was at this point that the game got a bit sloppy for the Acalanes offense, with a couple of holding penalties, and an interception. Fortunately the Dons D stayed tough and Castlemont was unable to take advantage of the turnover.

The defensive effort continued to be strong and after one Castlemont first, LB Logan Ketcham broke up a 4th down pass attempt and the Dons were on offense once again. Wasting no time at all, Souza looked to WR Dante Montgomery running a deep post and 44 yards later Acalanes was in business at the Knight 10 yard line. On the very next play, WR Trevor Rogers found an opening running a quick slant, and the Dons had their fourth TD of the quarter. Dons 28, Knights 0.

The offense then looked to get back on track and appeared to be doing so after a WR Screen to Berrien, broken wide open by two great downfield blocks by Nicolacakis and Montgomery, brought the Dons all the way down to the 24. However, another interception in the end zone turned the ball back over to the Knights. It was here that the defense picked up the offense once again when LB Miller Smith picked off the Castlemont QB and returned it all the way back to the 15. This time the Dons went to the ground game with a perfectly executed RPO. Seeing the Knight DE crashing hard, Souza deftly faked to Malmquist, took the ball himself, and scooted around right end untouched for a 15 yard TD. Dons 35, Knights 0.

With all that quick scoring, the Acalanes defense was spending a whole lot of time on the field without much rest, and it was starting to have an impact. On Castlemont’s next possession, the Knights hit a couple of long passes that brought them down to the Acalanes 5, and a short run resulted in their first TD. The two-point conversion was no good, and now it was Dons 35, Knights 6.

If the defense was hoping for a long rest on the Dons next drive it was not to be, as on the very first play from scrimmage Souza hit Montgomery on a 71-yard fly pattern out of the slot and no one could catch him, Dons 42, Knights 6. It didn’t matter to the defense this time though, as they stiffened again and held the Knights to a quick 3 and out. A big punt return by WR Andrew Habas put the Dons into a short field at the 20, although two subsequent holding penalties pushed them all the way back to the 45. That didn’t end up slowing the Dons for long, a 15-yard completion to Berrien was followed by an explosive 30 yard inside screen to Rogers who sprinted left, following blocks by the O-line, then cut back right all the way across the field out running the Knight defenders to the corner of the end zone for the score. Dons 49, Knights 6.

With a little desperation and time running out, Castlemont threw caution to the wind launching a deep bomb on fourth and long and hitting it over the Dons DBs for a long TD. Again the two-point conversion was missed and now it was Dons 49, Knights 12. Acalanes and Castlemont then traded possessions back and forth until the Dons started moving again. RB Ellis Burger burst free on an 18-yard run, QB Connor McPhail hit Habas on a 9 yard out, Burger again for a first down, McPhail to Habas for 8, McPhail to WR Patrick Nicosia for 5 and a first down, and Acalanes was in the Castlemont red zone. After a short two-yard run on 1st, Burger busted out left on 2nd down and wasn’t stopped until he hit the end zone for the final Acalanes TD. Dons 56, Knights 12.

With time running out in the 4th, Castlemont wasn’t done. A 90-yard bomb gave them another long TD making the score Dons 56, Knights 18, and a successful onside kick left on the field by a Dons miscue, gave Castlemont the ball again on the Acalanes 20 with another chance to score. This time, however, the Dons shut it down with DB Ethan Rowland picking off the last Castlemont pass in the end zone and stopping the threat. The clock ran out and the final score stayed at Dons 56, Knights 18.

Big three-game swing in the next few weeks, at Las Lomas, home vs Campolindo, and home vs Benicia. The boys love and appreciate all the support from the students, staff, administration, parents, and community, so please come out to Las Lomas next Friday and cheer on your team because DONS SHOW UP!