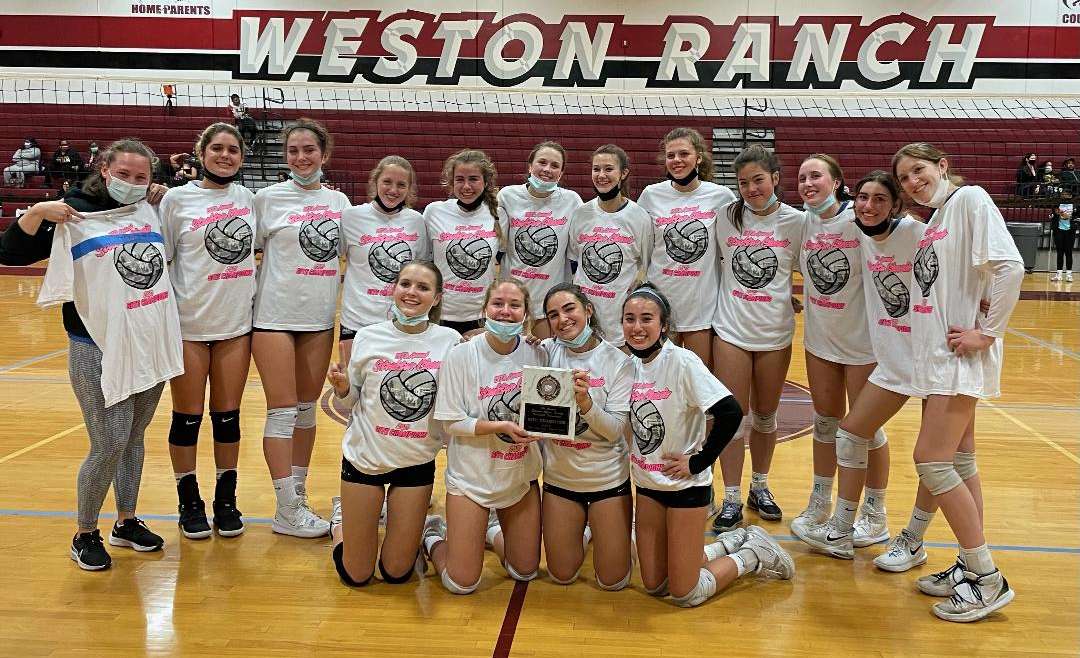 FEAR THE BLUE ON THE COURT

On Thursday, October 7, the Acalanes Girls Varsity volleyball team traveled to Las Lomas High School to face the Knights.  In game one, senior Bela Yanakieva got the Dons started off with a kill, and junior Mara Korzeniowska rattled off three aces to put the Dons up early 5-0.  Junior Hanna Hageboeck delivered a kill and two aces to keep it going for the Dons. The game tightened up, and consecutive aces by sophomore Jade Profilio kept the Knights at bay.  The game got closer once again, but a clutch kill from Maelin Mason gave the Dons a 23-21 lead and the Dons won the first game 25-21.

Mason had more kills in the second game and junior Katelyn Olin and senior Emma Johnson delivered multiple kills as the Dons coasted to a 25-15 victory in Game 2.

Game 3 was a nailbiter, and the Dons found themselves trailing 21-22, but Olin scored on a tip.  Mason’s consecutive kills gave the Dons a 24-23 lead.  Yanakieva had a kill and a block to the Dons up one, then Johnson’s kill won it for the Dons, 29-27.

After sweeping the Knights, the Dons traveled to Stockton for a tournament on Saturday.  In the first game of the tourney, the Dons played Franklin, who was overmatched. The Dons won 25-6 and 25-7.  Some highlights included a great dig from senior Kira Wood followed by clever push kill by junior Mara Korzeniowska; a kick save by senior Aly Kirke that a diving Wood dug out;  a number aces from Profilio and fellow sophomore Monica Dikova; and kills from Johnson, Yanakieva, Olin and juniors Ryann Jones, Maya Paul, and Apple Walton and strong defense from Georgia Winkles.

The second game against Milennium was closer.  The Dons were down 0-4 when a back row kill from Johnson and a Hageboeck kill got the Dons going.  Behind aces from Hageboeck and several kills from Olin, the Dons won the first game 24-18.  The Dons won the second game 25-18 with kills by senior Gianna Manzone, Kirke and Walton, and Jones’ kill of an overpass sealed the win.

With that victory, the Dons advanced to the semifinals to play Mission Oak.  Three kills from Johnson got the Dons going early.  Olin’s five kills led the Dons and multiple kills and aces from Hageboeck put the Dons in position to win at 21-19.   Wood then managed to successfully keep a ball alive that hit the ceiling, leading to a 22-19 margin.  A down the line kill from Johnson and an ace from Profiilio gave the Dons at 25-21 victory in game 1.

The Dons ran away in game 2 against Mission Oak, winning 25-14.  A service run by Profilio and kills from Olin, Kirke and Jones, including one off of a great cross-court set from Korzeniowska, were among the highlights.

The Dons then faced Berkeley High School in the finals.  Kills from junior Maya Paul, Jones, Olin and Hageboeck kept it close but the Dons were down 15-19 when they took a timeout.  Olin then delivered a kill, followed by a Jones ace, a Berkeley error and another Jones ace, and the game was tied at 19.  A joint block by Hageboeck and Olin and an ace and a great dig from Profilio and an ace from Korzeniowska followed.  Korzeniowska then dumped the ball on the other side instead of setting it, giving the Dons a 25-24 (a special tournament rule did not require a 2-point margin) the victory in game 1.

After hosting Northgate on Tuesday, the Dons will hold Senior night against Alhambra on Thursday.  A ceremony honoring seniors Johnson, Kirke, Manzone, Yanakieva and Rachel Zhang will take place at around 6:00, after the JV game and before the varsity game.