JV Football: There is No ‘I’ in Team, But Look for ‘US’ in AmbitioUS 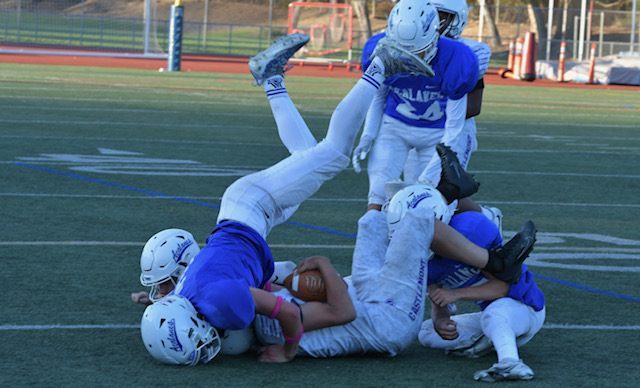 The JV Don’s continued to roll this week shutting out Castlemont High School with the score of 56 to 0. What a great way to cap off a amazing Homecoming Week!

Everyone was wondering if the opposing team was even going to show up at first – Game time was scheduled for a 4:30 start, but because of a transportation snafu, and Highway 24 traffic, the Knights did not arrive until after 5:00 pm.

Once the game started the JV Dons put away the game on their very first possession, on their very first play from scrimmage, Quarterback Sully Bailey hit Wide Out Paul Kuhner in stride for a 62 yard touchdown! Sully finished the game 1 for 1 passing for 61 yards and a rushing touchdown – Paul Kuhner had the one Receiving touchdown and then later in the contest took a handoff 13 yards for the score – Jake Boselli took over at Quarterback on the next possession, and it was more of the same. Jake immediately connected with Henry Souza for a 16 yard touchdown. Jake also had a rushing touchdown on the Dons next possession.

At this point in the game, end of the 1st quarter, most of the starters were cheering on their backups from the sidelines. Collin Malmquist came in at tailback and pounded the ball 14 yards to the end zone for his first touchdown of the year. Somehow Paul Kuhner slipped back into the game and took a handoff 13 yards for his second score of the game. That was immediately follow up with Malmquist scoring his second touchdown of the season and game. The Dons got the ball back late in the 4th quarter and Calvin Kotarba scored the contest final touchdown – This offense has so many weapons to choose from and does not need much time to score at all. The JV Dons only held the ball for 10 minutes of the 40 minute game! They scored 8 times and only ran 17 total offensive plays, racking up 273 total offensive yards, with 0 turnovers!

The Defense was dominating, even with outside Linebacker Jack Giorgianni getting called up to Varsity this week! Jack proved it was the right decision by leading the Varsity Defense in tackles! The other members of the Defense knew they were going to need to step it up and boy did they ever. The Knights ended the game with -3 total offensive yards… despite having the ball for 30 minutes. Gavin Bender had a great game with 5 solo tackles and 3 assists – Collin Malmquist stepped up on defense as well racking up 5 tackles, 2 of them for a loss of yards and had an interception. Aidan Yates, Ethan Pancoast and Aidan Haslam all turned in a great defensive showing as well. 15 different players recorded a tackle, great to have games where so much of the team gets playing time.

One amazing stat line that was that the JV Dons converted all 8 of their extra point attempts using 2 different kickers, again shows the depth of this team – Ace Reeder and Jake Boselli were perfect on PAT’s!

The JV Dons are back in action next Friday @ Las Lomas, which is the start of league play – Game Time is 4:30 FEAR the BLUE!