VARSITY FOOTBALL: It’s About Contextualizing and then Building from It 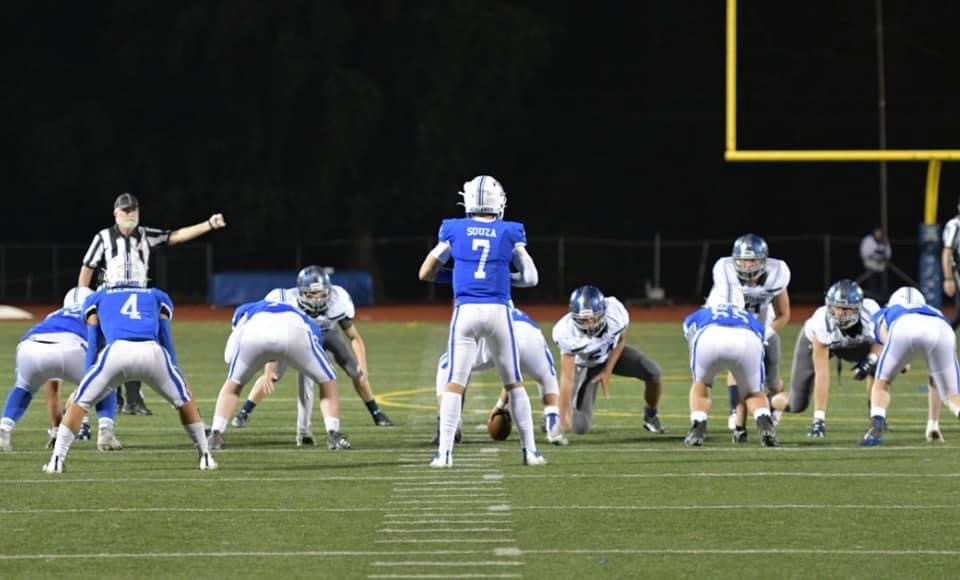 It was definitely our game to win.  We beat ourselves.

The Varsity Football team lost a gut wrenching game on Friday night on their home field to the Damonte Ranch Mustangs, who were visiting all the way from Reno Nevada. The contest went back and forth all night, and it seemed that whomever had the ball last would end up winning the game, and that is what happened, 30 Dons and 31 Mustangs.

When Damonte Ranch scored their last touchdown with only 1:30 left in the game, everyone wondered if the Don’s would have enough time to either get into field goal range, or score a touchdown?! Quarterback Luke Souza took control and immediately hit Slot Receiver, Dante Montgomery, for what looked like was going to be about a 15 yard completion, but Dante broke a tackle and sprinted down the sideline for what look like the game winning touchdown! However, after some confusion on the field, the referee had blown a late whistle, that no one on the home side could hear because of the roar of the crowd! The whistle was blown because they said Dante’s foot had gone out of bounds while breaking the tackle. The good news was that by going out of bounds it stopped the clock, the bad news was the game winning touchdown was waived off.

The high and low of those emotions can be hard to overcome. A few plays later the Damonte Ranch defensive back made a good read on Souza’s pass attempt, and made a game ending interception on about the 4 yard line. Even then, the drama was not over, Damonte Ranch would still need to run 2 plays before time would expire. Their offense only uses the shotgun snap, so their quarterback had to make sure when he took a knee he did not inadvertently kneel down in the end zone for a safety. After the first kneel down the ball was marked down on the 1 yard line, they were then able to successfully down the ball a second time on about the 1 inch line.

The Dons offense put up great numbers, racking up 538 all purpose yards–299 through the air and 91 on the ground. The Dons scored 5 touchdowns. Dante Montgomery scored on an reverse, taking the ball 39 yards for the first score of the game. Will Berrien caught a 13 yard strike from Souza for a touchdown in the second quarter. Souza finished the game 19 for 33 passing for 299 yards and 2 touchdowns. The second passing touchdown was a 11 yard diving catch by Dante Montgomery!

Damonte Ranch did manage to stop our passing game on the next drive, when a defensive back made a good play and intercepted a pass in our end zone, then took the ball out of the end zone, got confused and ran back into the end zone where he was tackled by Trevor Rogers for a Safety! For most of the evening however, the Mustangs could not stop the Dons passing game, but they were successful in not allowing Acalanes to establish a running game, holding the Dons to only 91 yards rushing.

The Dons defense had a tough night! The Damonte Ranch running game proved difficult to stop, gaining an average of 6 yards per carry. This also created a time of possession issue, Damonte Ranch held on to the ball for 28:40 while the Dons had it for only 19:20, almost an entire quarter of the game difference . Acalanes offense is explosive, and has proved they don’t need much time to score, but time of possession is important in securing close games. Keeping the opposing offense off the field is sometimes the best defense! There were lots of defensive highlights, Senior Cornerback Miles Bergman intercepted a pass and took it 94 yards to the House for 6 points!  The Don’s picked off 3 Damonte Ranch passes on the evening, Bergman had 2 and Rowland had 1. Rowland had a fantastic game, besides the interception he also racked up 9 solo tackles and 8 assists – The defense effectively shut down the Mustangs downfield passing game down. Like I said, the running game was another story–we just could not come up with an answer to the running strategy.

One of the great things about this Acalanes team is that they do not dwell on things, no way! It’s not about suppressing the mistakes; it’s about contextualizing and then building from it. Onwards and upwards. No looking back! The boys are already watching film, back in the weight room, on the field and strategizing on their next opponent. Not taking their eye off their ultimate goal of a State Championship! Fear the Blue!

The Dons have a BYE week this week. The Dons are back on Friday Oct 1st for the Acalanes Homecoming Game against Castlemont Knights.