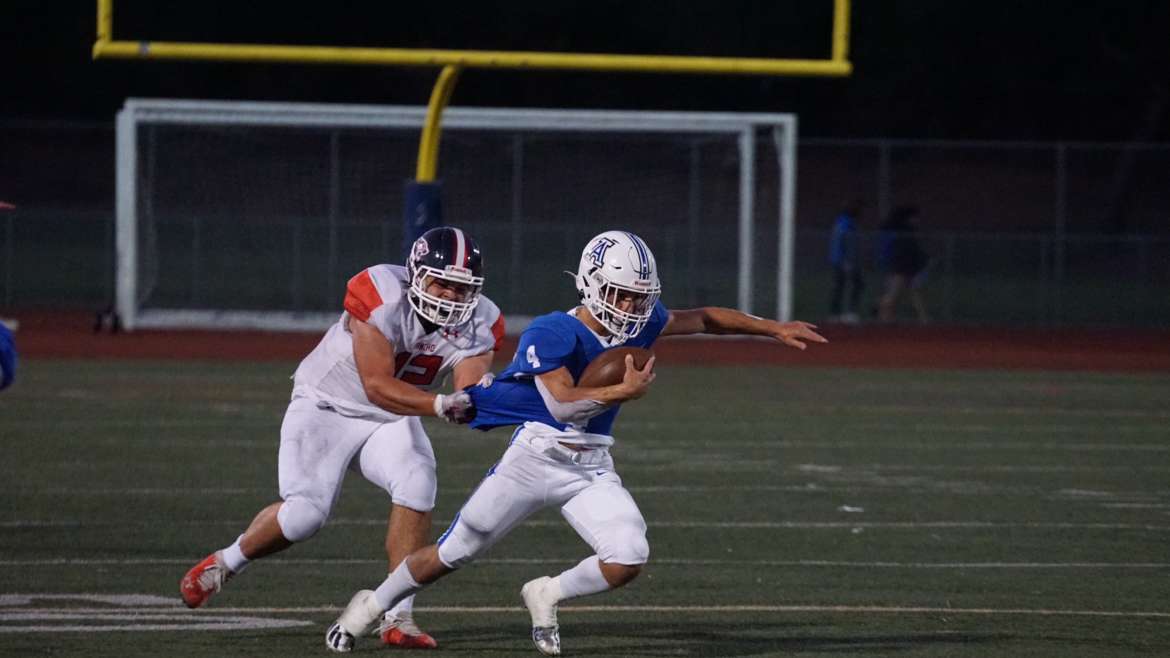 After a relatively pain-free victory over Sierra of Manteca, on Friday night the Dons received a rude early awakening, courtesy of Rancho Cotate. It all happened seemingly in the blink of an eye, as the Cougars completed four straight passes on their opening drive, the last one a 46-yard TD bomb for a 7-0 lead. After the Dons went 4 and out on their first possession, a big punt by Kyle Bielawski pinned Rancho Cotate back at their 15-yard line. However, on 3rd down and long, they hit another big 55-yard pass play, and the Cougars were back in Don’s territory. A few plays later and they were in the end zone again and the deficit was now 14-0. The Don’s offense was still a bit off, and after a short series, they had to punt once more. This time a big punt return put the Cougars at midfield, and again they were able to drive it into the end zone, Rancho Cotate 21, Acalanes 0, with 8 minutes and 30 seconds still left in the half.

It was time for the Dons to show their mettle. They could drop their heads and feel sorry for themselves or put on their hard hats and start grinding.

The first play of their next possession was a well-blocked outside run by RB Evan Malmquist for 14 yards. Then a completed flare pass from QB Luke Souza to WR Dante Montgomery for 9. A couple more Malmquist dashes up the middle and the Dons were into Cougar territory. The drive stalled there, but you could get the feeling that the Don’s offense was getting its footing. It looked like the Acalanes defense was also feeling a change in momentum as they turned it up a notch and limited the Rancho Cotate offense to only three plays before they had to punt it back to the Dons. Things were still not quite hitting on all cylinders yet however, as a fumble after a long gain gave the ball back to the Cougars. The Acalanes defense was not deterred though, and once again forced a punt after only three plays.

With the ball back in their possession, the Dons were starting to roll. A quick sideline route from Souza to WR Will Berrien for 14. Malmquist around the right end for 11. Montgomery on an inside reverse for 8. An inside screen to Montgomery for 11. The Don’s offensive line, LT Anthony Ortale, LG Tyler Murphy, C Ryan Haughner, RG Marcus Julian, and RTs Noah Yeager and Zach Robb, were starting to exert their will on the Cougar defense. A few plays later, Souza found Montgomery in the corner of the end zone and the Dons were on the board. Cougars 21, Dons 6 after the missed XP, and that closed out the scoring for the first half.

Starting with the ball in the second half, the Dons kept right on rolling. A flare pass to Malmquist went for 21. A couple of completions to Berrien and they were in Cougar territory at the 41. Perhaps tired of the quick completions, the Rancho Cotate DB bit on a pump fake and Souza lofted a perfect strike to Berrien for the 41-yard TD. The two-point conversion attempt was unsuccessful, and it was now Rancho Cotate 21, Acalanes 12. Rancho Cotate wasn’t going to go away easily on this night, however, and it only took them four plays to go 63 yards to score again, using the QB draw for big gains in the series. A bad snap on the PAT and the Dons were able to stop the attempted two-point scramble. Rancho Cotate 27, Dons 12.

Once on the field again, the Don’s offense was up to the challenge. Malmquist around left end for 14. Souza to Malmquist on a swing pass for 6. A beautifully blocked sprint-draw sprung Malmquist for 31 and well into Cougar territory. After a couple of incompletions, Souza hit WR Trevor Rogers on a deep out for 22 yards and the Dons were knocking at the door. Two plays later Souza hit Montgomery on a fade to the right corner and K Zach Murdin’s XP made it Rancho Cotate 27, Acalanes 19.

In keeping with the back and forth nature of this game, Rancho Cotate again drove down into Acalanes’ territory but that’s where the Dons D stiffened. On a 4th and 1 on their own 20, DE Anthony Ortale slanted down from the right side and LB Logan Ketcham jammed up the middle to stone the big Cougar FB for no gain and give the ball back to Acalanes. Sensing another momentum shift, Acalanes wasted no time going for the big play. A 46-yard bomb from Souza to Montgomery got the ball into Cougar territory and on the very next play, Souza went to the other side and hit Berrien for the 34 yard TD. Down by just two now, the Dons executed a perfect two-point play, Souza rolling right and hitting Montgomery for the score. For the first time, it was all even, Dons 27, Cougars 27.

As the game moved into the 4th quarter, the battle was still raging. Rancho Cotate had two big pass completions and they were moving again. After good pressure from the Don’s d-line, the Cougar QB scrambled right and was able to flip a pass over the head of the Acalanes DBs and complete a broken play TD. Now Rancho Cotate had gone ahead with 9:15 left in the 4th, Cougars 34, Dons 27.

Would the Dons rise to the challenge? After coming back from 21 points down to start the game, they weren’t about to slow down now. Souza to Montgomery for 10. Souza to Berrien for 9. Malmquist up the middle for 7. Berrien for 5, then again for 11. After an incompletion, Malmquist finishes off the drive with two rushes including the last one up the middle behind Murphy, Haugner, and Julian for the TD. Murdin’s XP is good, and they were again knotted up, 34 to 34. After an exchange of punts, the Dons had the Cougars in a deep hole on fourth and long, but a roughing the kicker penalty gave Rancho Cotate new life with time running out in the game. A couple of plays later, the Cougars hit a big 37-yard pass and they were in business at the Acalanes 23-yard line. With very little time left, they were now in a position where a TD or FG would win the game. That’s when the Dons D came up big. After watching the Rancho Cotate QB scramble for extra yards all night, CB Marshall Lockwood came up and stripped him on a bootleg right and DL Sam Hafner came up with his second fumble recovery in as many games, and just like that the threat was over. The Dons offense ran out the clock and now we were set for overtime.

High School overtime rules are similar to College overtime rules. Each team gets to start at the 25-yard line to try to score. If one team scores and the other doesn’t, that team wins. If one team scores more points than the other, TD vs FG, or TD + 2pt vs 1pt PAT, the team with the higher score wins. Rancho Cotate started with the ball and only took three plays to get into the end zone. They chose to kick the extra point, and it was Rancho Cotate 41, Acalanes 34, with Acalanes given their own chance to score from the 25. After an initial incompletion and an 11-yard gain on a middle screen to Berrien, four straight rushes by Malmquist behind an invigorated offensive line got the Dons into the end zone. Now Acalanes had a choice, kick for the tie or go for the win. Sensing the opportunity was right, Coach Burnsed kept the offense in to go for the win. Perhaps seeing that the Cougars might be looking for the Don’s to continue on the ground, Montgomery ran a quick flat route to the right, and like clockwork Souza delivered for the thrilling 42 to 41 Acalanes victory!