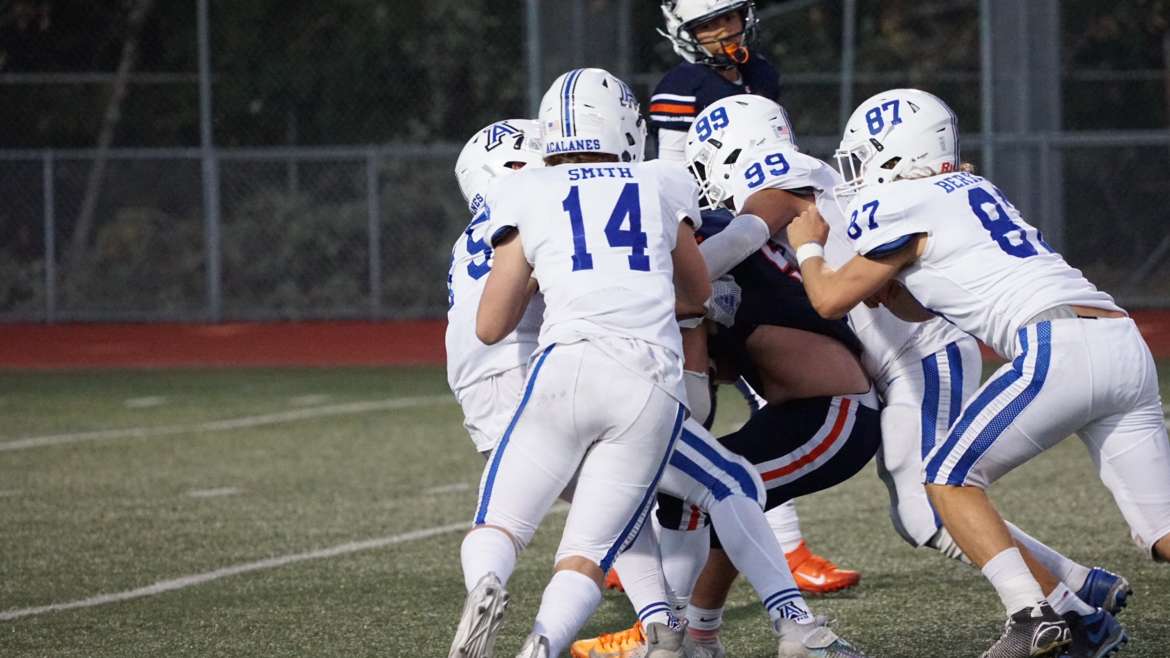 There are over 50 players on the Acalanes Varsity roster and all of them combined to make a crashing blue wave that surged over the Buccaneers of Balboa on Friday night, resulting in a 56-0 win for the Dons and their first shut out of the season. Leading the way on defense were LBs Sam Hafner (3 solo tackles, 3 assists) and Logan Ketcham (3 solo, 2 assists, 1.5 TFLs, and one sack for -11 yards), as well as DLs Kyle White, Tyler Worthington, and Justin Zegarowski, each with 3 solo tackles.

Balboa started with the ball and the Dons defense announced their presence immediately as Ketcham stepped up and stoned the Buccaneer RB in the hole. On second down Hafner & White stuffed the run for no gain, and then on third DBs Ethan Rowland and Miles Bergman converged on a WR screen to bring up fourth down for Balboa. After a short punt and a block in the back penalty on Balboa, the Dons took over on the 40-yard line. QB Luke Souza continued his hot hand from the prior week, hitting WR Will Berrien on a quick out for 11 yards. Next play, same story other side as Souza hit WR Dante Montgomery for 13. After two passes got Acalanes into the red zone, it was time to rev up the run game. RB Ellis Burger ran behind LG Tyler Murphy and LT Anthony Ortale for 10. RB Colin Malmquist followed counter trey left behind RG Marcus Julian and RT Noah Yeager down to the 3. Then the same play once again and Malmquist was into the end zone for the Dons’ first TD. K Zach Murdin’s XP was good, and it was 7-0 Acalanes.

The next Balboa possession lasted a bit longer. After a near interception by LB Nathan Kim, the Bucs completed a 13-yard pass for a first but were shut down immediately after, courtesy of a couple of TFLs by Worthington. On fourth down, a long Balboa punt had the Dons back at their own 26 to start their second drive. Montgomery took the ball on a reverse for 15. Souza hit WR Ethan Torres for a short 2, then on second and 8, Souza went to Torres again on a swing pass left and he turned on the jets, leaving the entire Buccaneers defense behind on the way to a 57-yard TD. Murdin was again perfect on the XP, and it was Dons 14-0 at the end of the 1st.

Things didn’t get any better for the Buccaneers on their next possession. After a loss of 2 on a run, a holding penalty, and a run of 7, they were set to punt from deep in their end of the field. A bad snap went over the punter’s head and LB Kyle Bielawski chased it out of the back of the end zone for a safety. Dons 16, Bucs 0. Now Balboa had to kick it back to the Dons again, but this time the Acalanes offense wasn’t able to put together a drive. After a completion to Berrien for 20, and a Souza run for 6, a Dons fumble gave the ball back to Balboa. Despite the turnover, however, the Dons defense wasn’t about to give up the shutout. After an initial first down via the run, LB Hafner ended the drive with a TFL on third down, forcing the Bucs to punt. With the ball back again, the Dons’ offense started to flow. Souza hit Berrien on a bubble screen for a short gain. Then Julian and Ortale combined on an inside trap to spring Malmquist for 12. With the Buccaneer defense rolled up for the short pass or run, Souza hit WR Trevor Rogers on a 30 yard go route deep into Balboa territory. Continuing to balance run and pass, LG Murphy completely pancaked a Buc D-linemen on a counter trey, and Malmquist shot through the hole for another 12. Finally, to complete the drive, Souza lofted a perfect ball over the heads of the defense to Torres in the back of the end zone for the third Dons TD of the day. The missed XP made the score Dons 22, Bucs 0.

Down a few scores now, Balboa started to move the ball a bit. After a few completions and a 15-yard run, the Buccaneers tried for a long ball but were denied when DB Coco Gannon picked it off deep downfield. Given another shot to score before halftime, the Dons didn’t waste any time. On the first play, Montgomery flew past the Buccaneer CB on a wheel route and Souza hit him in stride… 89 yards later it was the fourth Acalanes TD and now the lead was 29-0 at the break.

Coming out in the second half with the ball, the Dons kept rolling. Souza to Montgomery for 20, to Rogers for 10, two short Malmquist runs to set up the last play and Berrien runs a hard dig route into the end zone for another Acalanes TD. Dons 36-0. Another three and out for Balboa and it was the Dons rolling once more. Another counter trey blocked beautifully by LT Noah Yeager, Julian, C Victor Nicolacakis, Murphy, and Ortale, broke Malmquist for 22. Souza to Montgomery for 15, and then Souza to Rogers on a fade for the 20-yard TD, Acalanes 43, Balboa 0. Again, the Dons defense was stout, forcing another three and out. After a clever, Souza to Connor McPhail to Burger option play, the Dons when back to the familiar 36 counter trey with Murphy and Julian opening a hole and Anthony Ortale blocking THREE Buccaneers to set Malmquist loose, and that’s all he needed. Fifty-three yards and several broken down Bucs later, Malmquist hit paydirt, making it Acalanes 49, Balboa 0.

Now into the fourth quarter the Don’s brought in McPhail at QB along with OLs Zach Robb, Luke Combi, and Jake Benken, alongside Nickalocakis to run the offense. Not missing a beat, McPhail hit WR Jake Takeuchi for a 5 yard out that he quickly turned into a 20-yard YAC. That was followed by a two-yard Ellis Burger run and a McPhail to WR Andrew Habas quick hitter that he took for an additional 20 yards of YAC. After three Burger runs got the Dons into the red zone, McPhail took it that last 11 yards for the final TD, which made the score Dons 56, Buccaneers 0.

Incredible performance by the Dons defense to retain the shut out, and the offense in scoring over 50 points on a team that is predicted to win its league title. Next week Damonte Ranch from Reno is coming to Lafayette and the Dons will hope to continue rolling for the next two and on into league play in a couple of weeks.