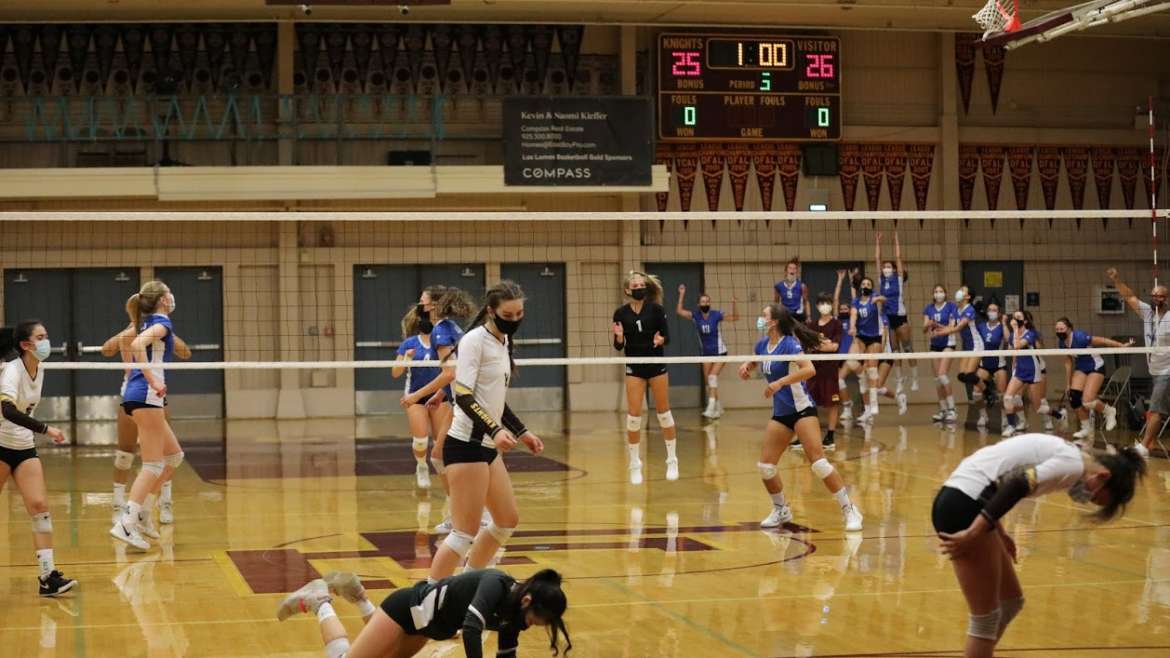 The Volleyball Dons visited the Las Lomas Knights for their first road match of the year. The teams played a best-of-3 set match and both squads were ready to compete. In set one, the Dons came out looking more like themselves after two setbacks to start the season. With senior libero Sydney Sowarby back to full health, and the return of senior Carly Coffee to the back row, the Dons showed off their depth of athletes to the Knights. Las Lomas got off to a fast start, but a big serving run by sophomore Katelyn Olin got the Dons back to the front. Some solid passing got the Dons offense in system, and a couple of nuclear kills by senior Annika Olson put the Knights on their heels. The set was closed out by a big hammer through the block by senior Lauren Davis. 25-17 Dons.

In set two, the front line was on display as the taller Dons got off to a fast start with some kills and blocks. The Knights kept is close and tied it 7-7, but a pair of short floating aces from Erin Meade forced a time out by the opponent at 11-7 Dons. Carly Coffee provided another ace to make it 14-8, but the Knights found their rhythm. The Dons tried to stem the tide at 15-15 with a big block from senior Tate Huisingh and sophomore Maya Paul. But, the Knights again used some effective hitting and tough serving to force errors by the Dons, eventually taking the set 25-18.

In set three, the pressure was turned up by both sides. The Dons went down early to the home Knights, and the limited capacity crowd was fired up. 3-6 Knights. 4-7 Knights. 7-9 Knights. 8-11 Knights. The Dons could not break through until senior Aisha Mohanty took matters into her own hands with a wicked serve, resulting in two aces, a 12-12 tie and a Las Lomas time out. Well, the time out worked, as the Knights went up 17-13, then 16-19, then 20-22. But again, here come the Dons, this time Carly Coffee with an ace to make it 22-22. Some nice swings by Elena Needs, Tate Huisingh, Lauren Davis and Annika Olson, off the buttery sets from Aisha Mohanty and Erin Meade, gave the crowd all the feels. But, a few Don’s mistakes helped the Knights get to match point, 22-24. Nervous time. The Dons front line answered and took over with two points in a row, 24 all. The Knights had a kill, now match point again, and this reporter is officially distracted. The Dons clutched up again, 25 all. After a tough serve from Aisha, and a great rally, the Dons scored to get to their own match point. C’mon girls!! Lauren Davis pounded another one through the block, 27-25, Dons prevail!

The Dons are right back at it tonight at 7:30pm at home vs Clayton Valley. Watch the action live on YouTube, search Alan Go-Acalanes to find the channel. Old school extended match – best of five tonight! Go Dons!