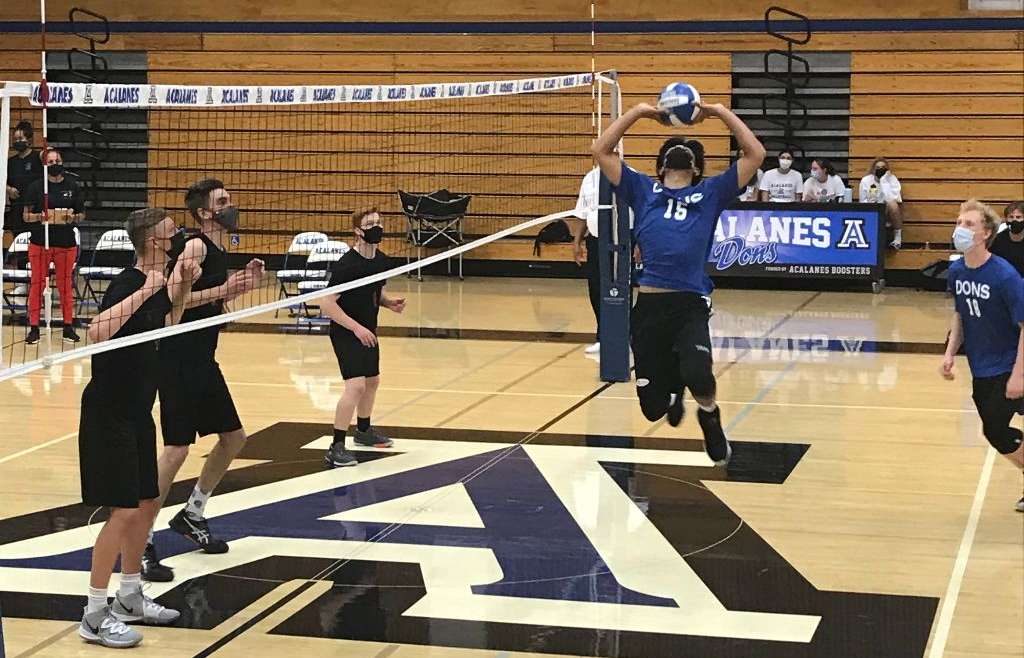 The Dons came into this contest as the overwhelming favorite, but the match started with six missed serves in a row (three by each team) – tying the teams early on at 3-3.  Gavin Zylstra started running up the score on a serving streak, which was complemented by Erik Moen’s spot on setting to both front and back row hitters; creating an almost dangerous flurry of scoring hits from Austin Kinnear, Harry Mannering, Tommy Bieker and Gavin.  Liam Stancik, Erik, Austin and Harry also racked up the score with multiple serving aces.  Liam Bodner accentuated the team’s front row defense with strong blocking and strategic tips.  Game one score: 25-9

Game 2 started a bit more somberly, with multiple point exchanges due to some Don’s offensive errors – missed serves, hits and general confusion on the court.  However, this predicament did not last long as the Dons quickly regained their composure and got back on track.  Austin helped change the momentum of the game with some ripper serves that proved to be ungettable by the Clayton Valley back row.   Tommy brought in some key targeted serves that threw the CV defense off. Both Liam and Tommy continued to defend the middle position and didn’t let much get through their blocks.  Grant Silveri tooled the CV defenders and punched a couple key points through.  And as if serving up signature sets all game wasn’t enough, Erik found a way to come in with a kill from the outside pin.  Game 2 score: 25-15

With the match already in hand, game 3 saw considerable action from the bench and guest JV players.  Opposite hitter Tyler Singh, found his rhythm early on with a convincing kill and followed that up with a nice serving run that included a couple aces.  Libero Cole Regan and DS Justin Law helped hold the back court defensive position from serves and errant passes.  Griffin Ruebner added to the Dons tally with consistent serves and front row play, and JV guest setter Kabir Batra, teamed up with Tyler for a couple floor pounding kills. JV guest middles, Victor NIcolacakis and Alex Malinovsky showed their potential as future varsity blocking machines.  This game was quite a bit closer than the previous two, but everyone had a chance to play and contribute to the team’s victory.  Game 3 score: 25-21

Next week:  College Park and Northgate