Varsity Baseball wins 6th in a Row by Beating Miramonte on Tuesday, 3-1 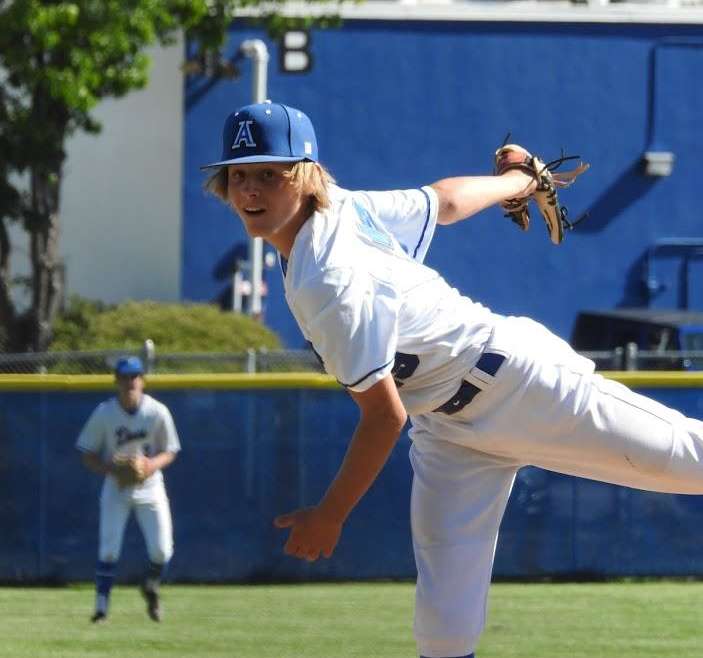 Fans who ventured out to see the Dons take on Miramonte at Ken Souza field yesterday were treated to several welcome surprises.  The first came when Freshman Henry Souza walked out to the mound for his Varsity pitching debut.  His grandpa, Ken, was undoubtedly smiling down from above as Henry dazzled the crowd while vexing the Mats.   He retired the first 8 Miramonte hitters in a row, mixing his pitches well and keeping their batters off balance with a sneaky changeup and a wicked curve ball.  Henry ended up pitching 4 strong innings, giving up only 2 hits, 1 walk and 1 unearned run, while striking out 4.  Impressive numbers for the first Freshman to start on the mound for the Dons in many years.

The Dons plated all the runs they needed in the 2nd inning after Will Berrien (jr) connected with his first of 3 hits to single in Brady Huchingson (sr), and Ben Burleigh (sr) singled in Henry’s older brother, Luke (jr).  They added a 3rd run in the 6th inning when Ben Burleigh hit a towering double to right-center field to drive in Berrien, which led to the second welcomed surprise of the day…the return of Evan Malmquist (jr) to the baseball field.  Perhaps better known for his spirited play on the football field, Malmquist has also always been a gritty baseball player.  To the delight of the crowd, he was called on to pinch run for Burleigh and looked right at home on the base path.

After Henry Souza’s departure, Dante Montgomery (jr) and Sam Heyman (sr) came in to shut down the Mats, combining for three efficient, scoreless and hitless innings, and sealing the Dons 3-1 victory.  It was important that Dante and Sam were efficient because they may be called upon again on Saturday when the Dons play De La Salle.  The third welcome surprise was that De La Salle sent a coach out to scout out the Dons players.  Whether it was out of fear or simply respect, it indicated that the #1 team in NCS and #38 in California is not taking this Dons team lightly.

Looking for their 7th win in a row, the Dons take on Miramonte again on Thursday (at Miramonte) before traveling to Lathrop, CA on Saturday for their much-anticipated battle with De La Salle.