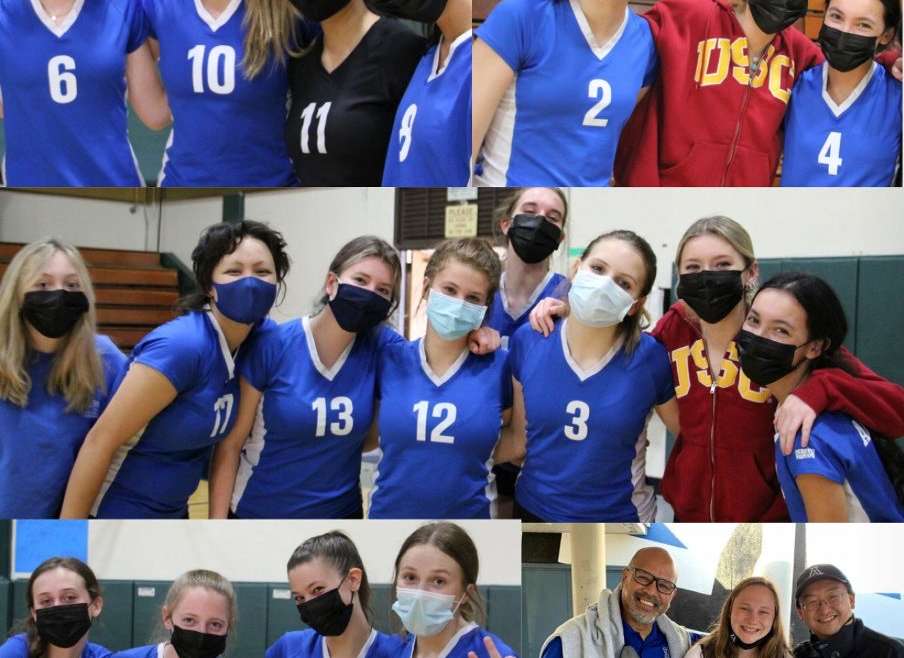 The Junior Varsity Dons scored a razor-thin victory against the much-improved Las Lomas Knights on Thursday, splitting the sets at 25-21 and 22-25. The one-point edge was much tighter than the 32-point drubbing the Dons delivered to the Knights when the teams met on May 5. Thursday’s game held the crowd in suspense with many cheers and oohs, with both teams fighting for the lead, and the Dons finally winning the match with a smart serve by Lyanne Wang.

The Dons closed out their 10-game, much-suspended season with 9 wins, including 5 games played to split sets, and their only loss on a 3-point margin to Campolindo. The team finished the competitive season as League Co-Champions!

The Dons started the first set with a looping pass from Hanna Hageboeck to Mara Korzeniowska, who set a slam by Ava Bunton into the Knights’ back corner. But Las Lomas quickly showed that they were not the team of three weeks ago when they pulled ahead 3-7, scoring 2 service aces and lulling the Dons into defensive errors. Kylie Choi’s serving ace, and her passes to Korzeniowska who set the soaring slams of Hageboeck, gave the team its first lead at 8-7. The Knights retook the lead to 13-16, until Sofie Foster’s kill set her up for a 5-point serving run that forced a Knights timeout. Both teams fought back and forth to a tie of 21. Back corner saves by Wang and Choi, and a Bunton slam, gave back the serve to Wang, who scored the final 3 points of the set.

The Dons started strong in the second set, pulling to an 8-2 lead on service aces by Korzeniowska and Foster and back-to-back kills by Apple Walton. The Knights fought back to a 10-10 tie, and then to a 12-18 lead, helped in part by uncharacteristic Dons’ service and defensive errors. Ryann Jones’ serves brought the Dons within 3 points, but the Knights extended their lead on rallies and a service ace that forced a Dons timeout at 15-20. Aces by Elsa Simas and Jasmine Frost closed the score to 20-23, and after called errors on each team that might not have withstood video scrutiny, the Dons found themselves at 21-24, knowing they needed to score at least once more to win the match. Wang’s next serve dropped the ball unexpectedly to the front of the opposing court, where it was fielded by a stumbling pass to the hitter, who valiantly knocked it into the net. The Dons celebrated wildly, as if they had won the set, though that would be accomplished by their much-improved opponents on the next long serve.

Congratulations to the Dons on a terrific season!