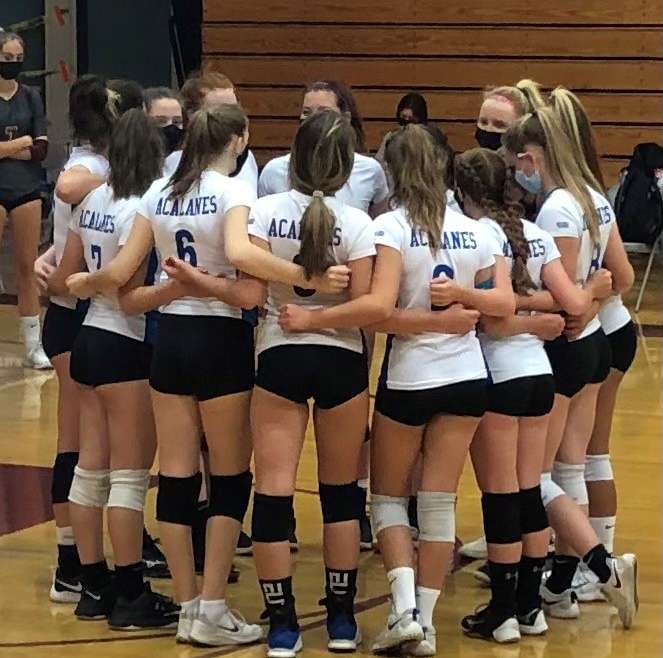 The moment you walked into the Las Lomas gym, you realized the futility of your mask against the intensity wafting from the visitors’ side of the net.  Well before the match even began, the Las Lomas Knights—not unlike the Northgate Broncos and Campolindo Cougars before them—would fall victim to the cool, confident, machinelike pregame ritual of the Acalanes Freshman Lady Dons. Watching the fierce, intimidating, high-flying Dons perform their hitting and serving drills from across the court, the Knights seemed more awestruck than inspired. And yet all they could do was watch. In fact, they had no choice. After all, a momentary glance in the wrong direction was a risky venture—one that could result in serious bodily injury from the barrage of flying leather coming at them. It was a deafening salvo, emanating from the Dons’ primary gunners: Chloe Lockwood, Mika Bocobo, Tea Sloane Smith and Anna Macleod.

The intensity of the Dons’ pregame attack transcended the opening whistle and carried the team to an easy first set victory. Especially impressive was the all-around play of Eva McGrath and the Dons’ field commander, Jade Profilio, who orchestrated slam after slam from the likes of Mia Iams, Anna, Mika, and Tea who thrilled the gym with a particularly graceful, well-placed tip which sent half of the Knights to the wood like bowling pins. It was 0-7 before the Knights would finally call a desperation timeout. Unfortunately for the Knights, the onslaught would continue as the ball kept finding its way to Jade, then Chloe, Mia, and Mika, all of whom demonstrated power and precision in their respective services and blazing, targeted hits, elevating the Dons to a final score of 8-25.

The second set was no less thrilling for Dons fans. The second point of the set was a long, thrilling rally, kept alive by a remarkable diving pass from Paige Passalacqua to Tea. Despite losing that point, Paige would force a side-out on the very next point with a beautiful hit straight down the throat of the Knights. With a quick ace from Ruthy Protass, the Dons would win the next two points before the set became significantly more competitive. With skillful passing and timely saves from Kira Chan and Elise Fox, Eva and Tea continued their patented set-spike combination, bringing the set to 7-8 and service to the incomparable Megan Hill who imposed her will on the Knights, winning the next 7 points including the most exciting rally of the match at 7-12 when the ball crossed the net 13 times. The Don’s would quickly get the ball back and Megan’s serving prowess was matched by that of Kira, skippering the Dons through the next 5 points, underscored by a couple of nice hits from Ruthy and a dramatic windmill spike by Mia. The final points of the game were dominated by the Dons who played as if for their lives and especially Tea who fittingly served to win: 12-25.

Curiously, at the end of the match, Chloe called out to Mia: “Hey, Mia — what’s love?!” she exclaimed, apparently repeating a question that has been on their minds. As I’m sure Coaches Roman, Haley and Alan would agree, it is fair to say that the only team who has a chance at beating the Acalanes Freshman Dons this season is the Dons themselves. As long as these girls continue to play their inspired, team-oriented brand of volleyball for the duration of the season, win or lose, Chloe might realize the answer was right in front of her…