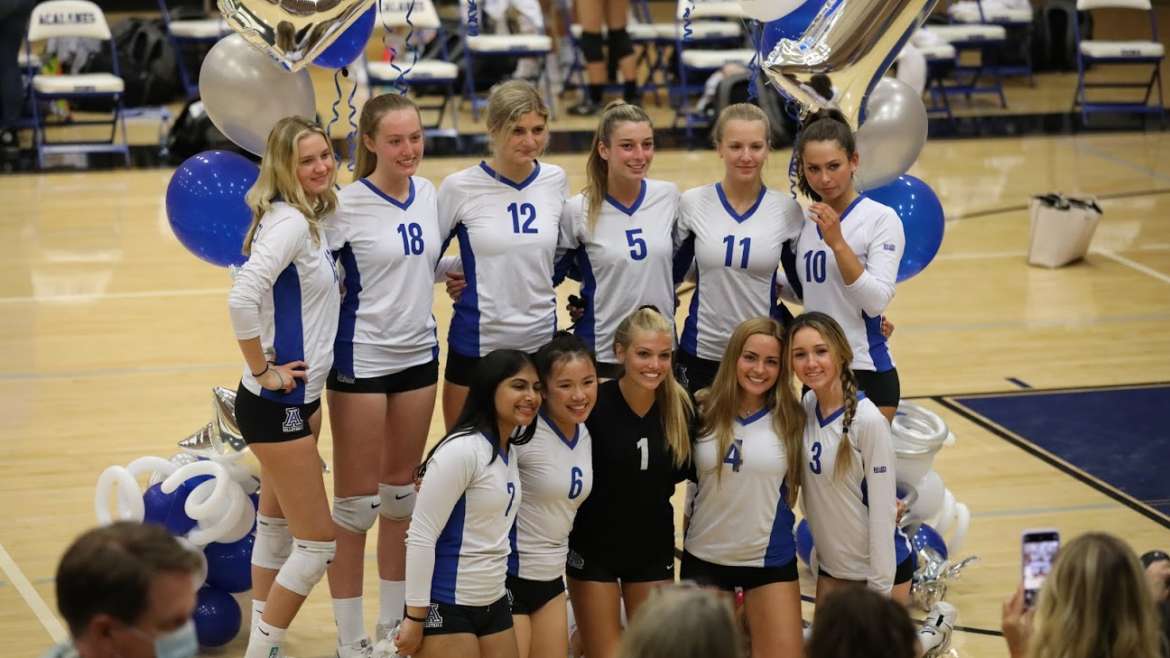 Last night, your Dons returned home to take on the Las Lomas Knights in their last match of this abbreviated 2021 campaign.  It was Senior Night, which of course had been postponed once already, and the eleven senior Dons showed their Acalanes Blue and White with pride, poise and class. As a bonus, there was an invitation-only, or pretty much, student section, which meant A LOT to the girls.  Dons Nation returns!  And they were spectacular.

This was the third match in three nights for the team, as they were coming off a heartbreaker at Northgate and a big triumph at Miramonte.  Add in Prom, finals, senioritis, and a few grad parties, and yes, these girls are running on fumes.  The presentations for all of the seniors and their families were very nicely staged by volunteer parents (the best, I’d argue) from the volleyball program, but soon the bittersweet tone turned to focus on the job at hand….BEAT THE KNIGHTS!  Here we go…

So….the focus turned a little more slowly than everyone hoped.  The Knights came out firing, and we came out a little passive.  Before the Dons could steady the ship, they are down 8-15 and looking for answers.  Senior Elena Needs provided some spark, with a 5 point serving run, taking the score to 12-15, and a TO for Las Lomas.  Out of the time out, senior Annika Olson clamped a Knight’s hitter, and senior Lauren Davis crushed one down the line, getting the Dons to 15-18.  The gym started to rock, as the mid-set cry from a member of the Nation ‘SMACK THAT S*** ANNIKA!!!’ resulted in a massive spike from the senior captain, delighting her classmates. Elena Needs then converted on a nice set, but the Dons continued to chase, 18-20.  The Knights stretched it out to 18-22, then 21-24.  At set point for the Knights, sophomore Katelyn Olin answered the bell, with a nice pound off of a twist play set from the other senior captain Erin Meade, 22-24. Olin then went to the service line (no pressure, just 25-30 screaming students about 15 feet to your left) and delivered an ace!  And another one.  And another one.  25-24 Dons.  But, you gotta win by two, and the Knights put together some great defense after that, scoring the next three points to take set one, 25-27.

Taking the court down one set to none, the look on the Dons’ faces seemed to say ‘we ain’t goin’ out like this’.  A big team block started things at 1-0, then Annika busted out with consecutive back row kills, and another one from the left side, 4-2.  Senior Makenzie Sauer continued to provide stability from the back row. Olin aced the Knights, Lauren smashed a pretty back set from senior Aisha Mohanty, and senior Tate Huisingh whacked one off the block, 7-3 Dons.  Erin Meade treated the ‘Creekers to two stylish drop serves, making it 9-3.  We got better service than your Nordstrom!  Ally Kirke then rocketed one off a back set, 10-5.  Now, a Annika Ace!  11-5. Senior Chloe Wu stepped up and aced them again!  Told ya!  Our service features a ‘no return’ policy!  Tate Huisingh flies in for a blast…but deftly tips a butterfly that softly alights in the middle of the Knights defense, 14-9.  Katelyn, BANG, 15-9.  Lauren Davis takes a feed from Aisha, 18-12.  Here’s Katelyn, serving again….ACE, ACE, BABY…20-12.  Aisha makes a diving save, then senior Syd Sowarby delivered a beautiful set to Ally for a ‘that’s not even fair’ tip!  21-12. Lauren Davis cannot be stopped, cross court bullet 22-12.  A jaw-dropping save by Sydney results in a floor shaking winner by Annika. Ally tip winner again, how does she DO that?  23-14. Finally, Tater Tot off the block, 25-14.   The Nation is raging, and we move on to the deciding set!

What occurred next was, in this writer’s opinion, the point of the year.  The Dons defense showed up in a huge way, with at least five awesome digs and unreal gets.  The Knights just kept returning the ball.  The Dons just refused to let the ball hit the floor.  Big credit to both teams for unreal effort.  But, the Knights finally gave in, and their last attempt dropped out of bounds, DONS WIN!   The Nation charged the floor (for the second time in a day, see baseball report), and the happy students smiled and hugged their way into the night.  What an ending to a crazy season.  This team went out like they planned, as winners.  GO DONS!

Paul Sauer Pics…check them out!