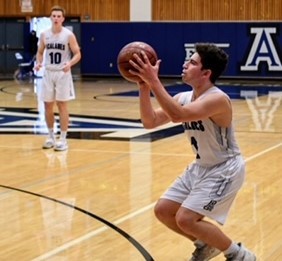 Boys Hoops earned a needed victory over the Alhambra Bulldogs on Saturday evening, 64-56. Scott Ruegg led the way with a game high 31 points for the Dons.

The Dons trailed only once in the game, 0-2, before a Graham Smith three-pointer gave the Dons a lead they would never surrender. Ruegg paced scoring in the first quarter, with nine, while Smith chipped in five, and Tyler Murphy another four.

The Dons carried an 18-12 lead into the second quarter, and quickly pushed their advantage. Anchored by the interior presence of Jake Davis, who led the team in rebounding and blocked shots, and quick hands of Jackson Aris-Dumas, who harassed the Bulldog’s ballhandlers throughout, the Dons held Alhambra to just nine points in the quarter. On the offensive end, Davis also nailed a three, while Ruegg added another seven. At the half, the Dons held a nine-point margin, 30-21.

The second half played out similar to the first. The Bulldogs briefly cut the lead to six halfway through the third, but the Dons responded and upped their advantage to 47-36 at the end of the quarter. In the fourth, the Bulldogs again clawed back to within 5, before the Dons closed the door with a 13-4 run.

Clayton Valley Too Much for Girls Varsity Basketball Dons, 62-42