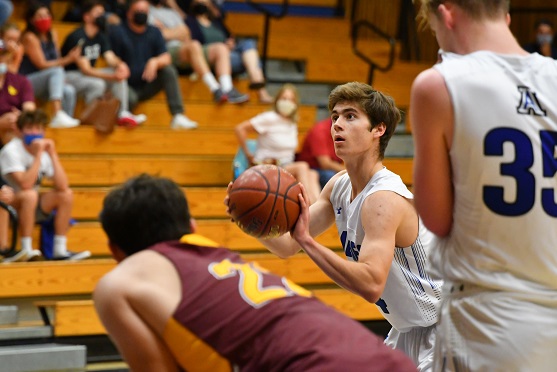 Boys Basketball claimed back-to-back victories for the first time this season, downing the Las Lomas Knights 63-56 at home on Wednesday. The Dons were led by Jake Davis, a sophomore, who scored a career high 18 in the contest. Senior Graham Smith added 13, senior Scott Ruegg 11, and senior Derek Kotarba 9.

The Dons steady play early took them to a 16-12 lead at the end of the 1st quarter and 33-35 at the half, punctuated by a Kotarba three-pointer at the buzzer. Things turned in the third, however, as the Dons struggled to find rhythm on both ends of the court, scoring just ten points while conceding eighteen, 43-43 at the end of three.

The Dons regained their form in the fourth, feeding Davis with a steady diet of interior passes. The big was ready to eat, dropping nine points in the quarter. With 1:33 remaining and the Dons holding a 56-53 lead, the Dons upped the defensive intensity with a full court press that forced a ten-second turnover. The Dons were then able to convert 7-8 free throws to close out the game.