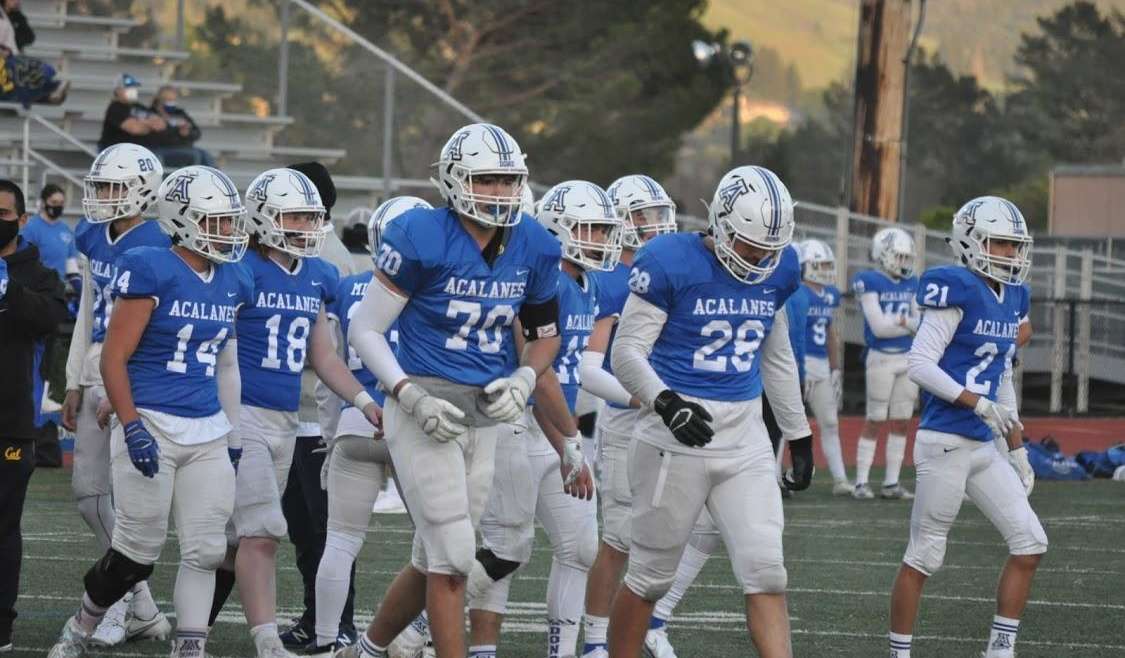 The Varsity Don’s Football Team had a Home Game vs. Miramonte on Saturday, which ended up being an away game due to an electrical malfunction at Acalanes High School. Well, there was no malfunction on the part of the Football team. Home or away, it did not matter. They drove up to Miramonte and got the job done! Final score 40-0.

It was interesting seeing the home blue jerseys at an away game, and it is always interesting talking to Coach Burnsed about coaching against his alma mater. He coached at Miramonte in the 80s.. He was awarded “Coach of the Year” in 1983 as the Matador’s Head football coach. Burnsed was inducted into the Miramonte Athletic Hall of Fame in 2018. In fact many of his current players fathers were either on one of his old teams, or they played against him! Before the game started the Acalanes players were all leaning on a piece of equipment, that looked like it had been there for a while, when Coach Burnsed walked up he told the story of raising the money to buy that equipment while he was the coach at Miramonte – We are super fortunate to have Coach Burnsed at Acalanes!

The Dons DON-inated from start to finish. The Dons won the coin toss and elected to Kickoff to the Mats to get things started. Hunter Ridley put the ball in the end zone for a touchback and our defense took the field. The Dons defense, lead by Defensive Coach Dan Ortega showed how things dominating this unit can be and shut down Miramonte’s offense on their opening drive and the were forced to punt. The Dons offense took the field, lead by Senior Quarterback Brady Hutchinson, who was 8 of 13 on the day for 179 yards. After running a few plays to get settled, Brady dropped back to pass and hit Junior Wide Out, Dante Montgomery for a 49 yard touchdown pass!

The other weapons on the Acalanes offense were yet to be used. Senior Tailback Nic Rossi ran the ball extremely well, including a punishing run that brought the Dons back to the goal line, and on the very next play there was a fumble that rolled into the end zone. Always alert Sophomore Linemen, Tyler Murphy, jumped on the loose ball for his first touchdown! Always exciting when the big men get a chance to score! Just like that the score was 13-0 Dons. Brady scrambled late in the 2nd quarter for another touchdown, making the score was 19 – 0 at halftime.

The Mats were winning in time of possession, holding the ball for 30 of the 48 minute contest. Unfortunately for the Mats, they were not able to get the ball across the goal line. The Dons first team offense started the first drive on the second quarter and Brady connected with Junior Slot Back, Evan Malmquist, for a 28 yard touchdown across the middle of the Mats defense. With the score 25-0, the Dons were able to get the backup players into the rotation for the rest of the game. Junior Quarterback, Luke Souza, ran the offense the rest of the match, connecting on both of his pass attempts including one to Junior Wide Receiver, Will Berrien, for a 12 yard touchdown! Souza has seen limited action this season at quarterback, but picked up right where he left off as a JV starter leading the team. The next time the Dons got the ball they kept it on the ground and Junior Tailback, Evan Malmquist got his second touchdown of the game with a slick run down the visiting sidelines for a 39 yard touchdown!

The defensive coaching staff should be commended for the schemes they threw at Miramonte’s offense all evening. They completely kept them off balance and guessing, limiting them 107 total yards of offense. The Dons defensive unit is exceptional – Lead by Senior Defensive End, Joey Carrillo, who had 8 solo tackles, 6 of them for a loss of yards, 3 assisted tackles, 1 sack and a blocked punt! Joey will be attending UC Davis in the fall and playing Football for the Aggies, I am sure he will have similar success at the collegiate level! Senior Defensive linemen, Jakob Ross, also had an exceptional night recording 7 tackles! Jakob faced off against his cousin, Sam Ross for the Mats, and I am sure it will be enjoyable for him at the holidays to discuss the game with his cousin in the years to come. All in all, it was a great night for the Don’s defensive unit! 21 different players recorded a tackle, 6 different players had tackles for a loss of yards!

The Dons play their final game this Saturday at home vs. California High School to close out the 2021 Spring Football season. Senior Night Starts at 6:30pm and Kickoff is scheduled for 7:00 pm. You can stream the game live and cheer from your couch because we always CHEER FOR THE DONS!