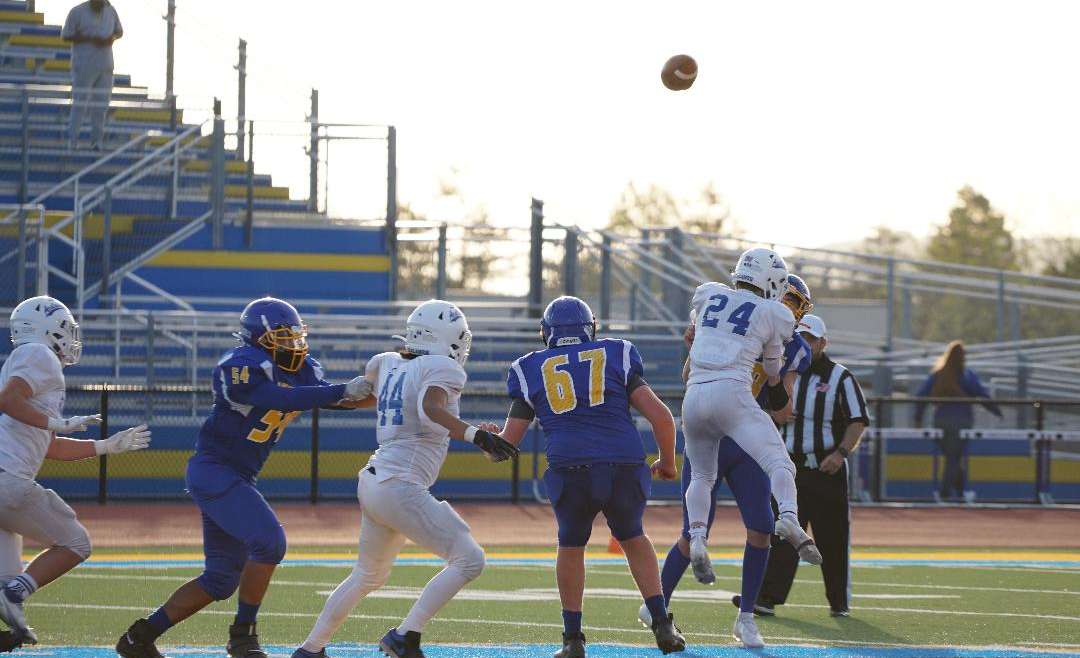 It took a while for the Dons to wake up last Friday in Benicia, and while several players were on real vacations during Easter Break, the Dons who were supposed to be playing football started off the game in vacation mode as well. Here’s the sequence of event for the first five plays.

1). Dons Kick-off goes out of bounds

3). Illegal procedure on the Dons

4). Don’s fumble recovered by Benicia, play is a “do-over” b/c of an inadvertent whistle

5). Benicia intercepts and returns to the Dons 13-yard line.

Already down to the Panthers 6-0, the Dons are now in danger of going down by two scores. It was time for the Dons to wake up and get going. On 1st down, LBs Miller Smith and Lex Jung stop the sweep right for no gain. On 2nd, DE Tyler Worthington and Miller, combine for another stop. On 3rd and 9, the Panthers are called for an illegal chop block on NT Marcus Julian and now face 3rd and 24. Pressure from DE Justin Zegarowski and LB Ben Foox on 3rd and 4th down make Benicia turn the ball back over to the Dons.

Now the defense was awake, but the offense was still in dreamland. QB Kyle Bielawski was sacked for the first time in two games, and a 12-yard completion to WR Trevor Rogers wasn’t enough to get to the 1st down marker. Benicia had the ball at midfield with a chance to score again. After an initial 1st down got the Panthers inside the 40-yard line of the Dons, the defense stiffened. Foox made a tackle behind the line for a loss of two on 1st down. An attempted pass was incomplete on 2nd down. On 3rd down the Panther QB was hit as he threw by Marcus and NT Victor Nickolacakis, forcing a Benicia punt.

Now the Dons “O” was starting to wake up. On 1st, Kyle hit slot receiver Jake Takeuchi for 5. RB Toby Schwing busted up the middle for 6 and a 1st down. A procedure penalty made it 1st and 15, and Kyle barely missed WR Trevor Rogers on a long pass down the left sideline. On the very next play, Kyle fired it to Trevor on a quick out, he spun out of the grasp of a Panther DB, and with the help of a great downfield block by WR Mason Michlitsch, scampered 45 yards to the Benicia 25-yard line. After a roughing the passer penalty got the Dons to the 12, a Benicia defender made a spectacular diving interception at the 1-yard line and the Dons were denied. Time again for the defense to step up. LB George Churchill stopped the dive on first down for no gain, then Marcus and Tyler stoned the Panther RB for 1 yard on 2nd down. Seeing there was no room in the middle, Benicia tested the Dons wide, and DB Trevor Rogers stopped the play shy of the marker.

A short punt, and heads up recovery by WR Ethan Torres, had the Dons in business again at the Benicia 30-yard line. After some success with the power game in the last possession, the Dons went to it again, running to the left side of the O-line who opened up a hole for Toby to blast through and run over a DB for a 20-yard gain. On 1st and goal, they did it again, running left behind Marcus and Victor, with Toby knocking the last Panther two yards back on his behind on the way into the end zone. New Kicker Trevor Rogers came in to nail the XP and it was 7-6 Dons in the lead.

Now that Trevor was warmed up, he blasted the kick-off into the end zone for a touchback and you could feel the momentum swinging to Acalanes. On 1st down for the Panthers, LB Ben Foox flew into the backfield and nearly intercepted a pitch, knocking it down and recovering the ball on the 9-yard line. Again, the Dons attacked on the ground, running 32 Trap up the middle to the one, and finishing the drive with Kyle rolling left to the pylon and in for the score. Trevor’s XP made it 14-6 Dons.

The Dons would not let up now, a run for no gain was followed by pressure by DL John Rusk, and two incompletions. Now the Panthers had to punt again… but it wasn’t the end of the half yet, and the Dons weren’t through with the bad luck. The punt hit a Don’s leg inadvertently on a bounce, and Benicia had the ball back. Time to dial up the D again, an option right was stopped by Marcus, Tyler and Ben, and Marcus and Tyler combined again to sack the Panther QB on 2nd. A run to the right was stuffed by Miller and Justin and after the Benicia punt, the 1st half was over.

The second half started well for the Dons. A 9-yard pass to Trevor was followed by a 5-yard first down run by Toby, which opened the door for a 20-yard bomb from Kyle to WR Jake Takeuchi putting the Dons back in Panther territory. Unfortunately for Acalanes, the Panther DBs made another amazing diving interception, and the drive was stopped. It didn’t matter in the end b/c the Dons defense was the immovable object now. Over the course of the game Benicia only had 82 total yards, 65 of which came on that first play of the game. All in all, 14 different players had tackles, and 6 different players had tackles for loss. A true team defensive effort.

A Benicia three and out quickly gave the ball back to the Dons. Kyle tossed a quick pass to Jake for 4. Then Kyle executed a nifty option read, keeping the ball and rambling for 20 yards down to the Benicia 8. A 32 Trap up the gut got Toby to the 1, and Kyle finished it off, cutting back on an option left through the Panther D and into the end zone. Trevor remained perfect on XPs and now it was 21-6 Acalanes.

After a long kick off pinned the Panthers back at their own ten. A near sack by Justin caused an intentional grounding penalty, putting the ball at the 1-yard line. Two plays later, without any yardage gained, Benicia chose to take a safety rather than punt out of their own end zone. Now it was 23-6 Dons in the lead and Acalanes would get the ball right back. After another interception by the opportunistic Panther defense flipped the possession to them, a three and out returned it back to the Dons. Things were going quickly for the Dons offense now… Trevor ran right for 5, then Jake ran it back to the left side for 7 and a 1st down. After stretching the Benicia defense right and left, they were set up for… 32 trap up the middle executed perfectly by the Dons O-line and finished by Toby the Tank Engine blasting for 60 yards to pay dirt. Trevor remained perfect and the score was now Dons 30, Panthers 6, and all that was left was to run out the clock.

It wasn’t the prettiest win, but thanks to a solid D and a punishing run game, the Dons overcame their slow start to win going away. It’s the second time in two games that the Dons not only rushed for more yards than they passed, but also held the time of possession advantage. Very unusual for an Acalanes offense, and a credit to the offensive line (Marcus, Victor, Justin, Nathan Kim, and Miller), as well as a QB (Kyle) and RBs Toby, Ben & Ellis) who can run past over and through people. Next week Miramonte!