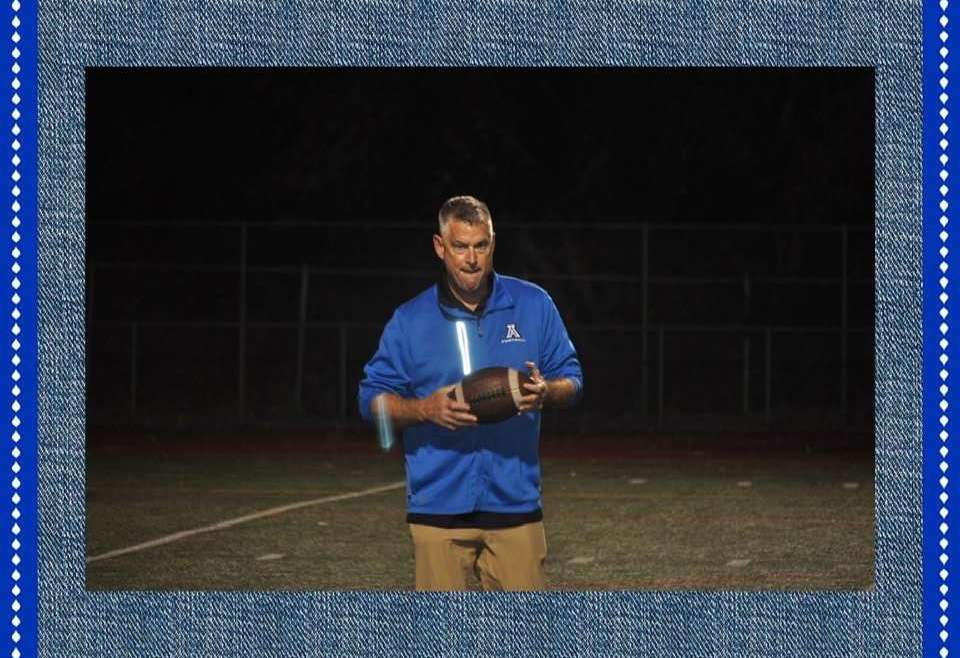 Before games, in the stretching line, Coach Young would walk down and hug every single player telling them that they would do great and that he loved them. This would really make a connection between the player and Coach Young. Players know Coach Young was going out of his way to let us know he believed in us: #4 Evan Malmquist, Running Back/Line Backer

Covid can not stop the JV Football Dons, especially not with Greg Young leading this crew. In late August, Coach Young was asked about covid and football:   I believe they’ll never take their high school sport or high school for granted. Our J.V. team is really working hard and driven to improve and succeed.  In small part it’s maturity, just due to this time in their lives.  In my heart, I think the maturity comes from the fact that they’ve lost so much, over the last six months, they’ll never take anything for granted. For most of them, they’ve lost one-fourth of their sports careers. Going forward, they’ll work hard not only for themselves, but for each other.

Last year’s JV went undefeated with a total of 343 Acalanes points (this is not a typo, 343 is the correct total) and 18 (this is not a typo, only 18 that’s it!) points for their opponents. Out of nine games, seven were shutouts under the leadership of Coach Young. Coach Young carries more than just a clipboard with him on the field. He carries an abundant amount of passion for his Dons. Just ask powerhouse Anthony Ortale, offensive tackle and defensive lineman, who was part of the 2019 undefeated team about Coach Young: I believe Coach Young goes above and beyond with us. He reaches out, ensures all of us that we are enjoying the sport while making sure we are passionate and working to the best of our ability. My favorite coaching quality is how much he cares. There are coaches that coach football, but Coach Young coaches football while caring for us and having passion while coaching us.

From top to bottom, Coach Burnsed has put together a rock solid staff on all three Dons football teams (Varsity, JV and Freshman). Regarding the J.V. staff with Coach Young gives praises to Randy Henderson, who has been on the Dons football coach squad for five years. Coach Young shares: Randy is not much of a self-promotor, he’s kind, smart, and I believe the most underrated coach on the staff. He has a keen and focused offensive mind, and should be a head coach! Coach Young and Coach Bill Fraser have known each other for nearly twenty years, and this is their fifth year coaching together. On the field, last year was Coach Fraser ’s first experience as the Defensive coordinator. In nine games, The Dons gave up gave up 18 points, including seven shut-outs. In five games, the Dons did not give up one point in league! Off the football field, Coach Fraser is a contributor to the Lamorinda community. Coach Fraser was a MOL football organizer and leader for years, and is now head coach of Dons Ladies Lacrosse.

Even though the Dons have not practiced together as a whole, Coach Young can see the big picture:  We’ve set a goal to be undefeated, perfect, and I believe this team loves the game of football, and each other so much, that they’ll compete to a level, they never would have achieved, if not there had been no pandemic.

You want your son to be coached by this man because your son will learn more about life from the inspiration of Coach Young.  Here is how Coach Young explains it in one word: Competitiveness.  Make no mistake, football is a war. Every play is a battle, and you are a warrior out there. In 10,000 years of genetic human history, villages were made up of hunters & gatherers. The best hunters are the Warriors. They represented the village, something battling for their freedoms, if not their lives. Football players are modern day warriors, representing Acalanes and  Lafayette. They may not be fighting for freedom, but they are fighting for respect, confidence and self-esteem, for themselves and their team.    In order to succeed in this arena, you better hate to lose. If you do lose, pick yourself up, and battle again. It truly is a microcosm of life, and a tremendous life lesson.    If you’re not competitive, or accept losing, you’re in the wrong sport! describes Coach Young.

Maybe the 2020 JV Dons have not put on their pads and their uniforms are not dirty yet…touchdown high fives and knocking down opponents are on hold for the moment. But for now, Coach Young and the JV staff are still making a difference for our Dons… Never underestimate Coach Young and his JV Football Dons!

Life without Acalanes Football we feel aimless, lost, and adrift– like a quarterback with no center, nachos without cheese or Beyonce without Jay-Z