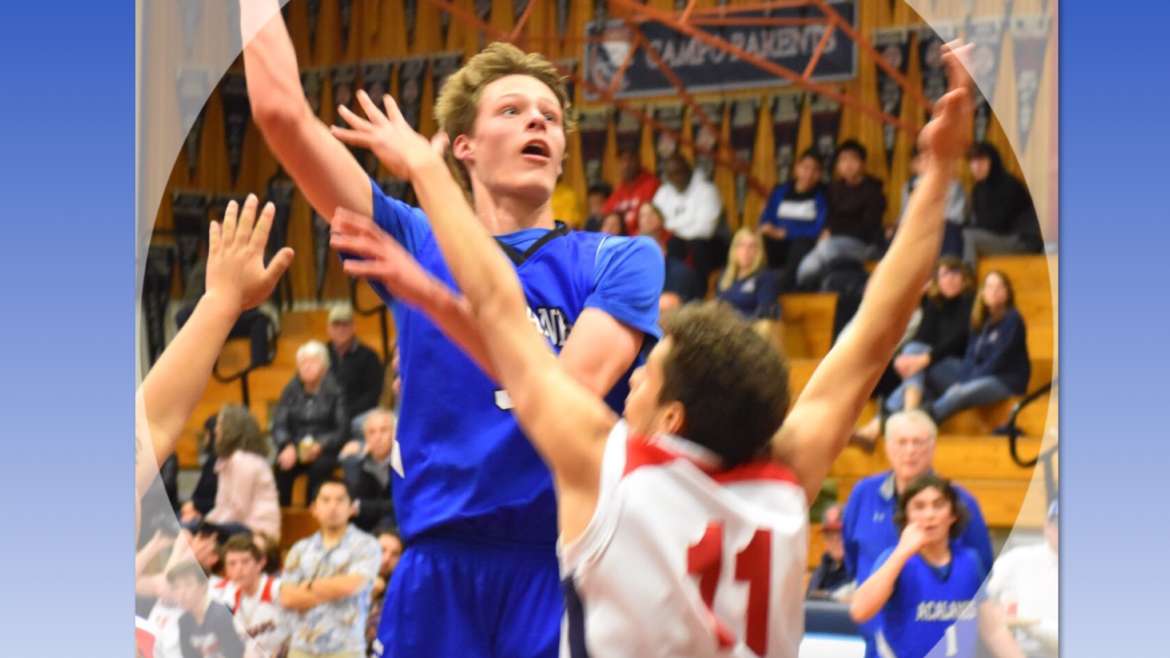 The Dons came to Moraga, not to play a basketball game. They came to win! The Dons played unselfishly, they play together, and they play hard Friday at Campolindo to claim victory!

The  Cougars made the first basket of the game. However, the Dons made more  baskets and lead each quarter of the game on both sides of the court.   At halftime, the Dons lead 19 to 11, closed up the third quarter, 37 to 22 and locked it down in the fourth quarter, 46 to 30.  This team has the Midas touch!

Everyone contributed to our strong defense. Yet, it’s hard to ignore Bennett Dodge on defense. The best way to visualize Bennett is to picture Zeus. Zeus is a sky god who controls lightning (often using it as a weapon) and thunder. Defensively,  Zeus, I mean Bennett  defended the basket, rebounded many, many  balls and struck the Cougars ball down like a lightening bolt. Oh and the thunder was the clapping of the Dons fans.  BOOM!

Taunts and chants have become part of sports experience at games. Sportsmanlike conduct is expected at all times. Players and fans will not engage in any kind of unsportsmanlike conduct with any coach, player or referee such as berating, taunting, etc. Well, that was out the window on Friday. The Frosh Dons haven’t had any real hecklers this season until they visited the campus of Campolindo. The Cougar students  came out to cheer on their team, taunt the Dons, but what they really did was open Pandora’s box.  Oops!

Every time Miller Smith (He is like Cronus the Greek God of Time, Reliability and Promptness) had the ball, the Cougar crowd would shout ‘It’s Miller Time’ repetitively. And, it was Miller Time! Miller shot two 3 pointers in front of the Campo student section. Miller after the game with smile stated, ‘I love their taunts, it energizes me’. Well, it must of energized Coco Gannon too.  Coco is not like Zeus or Cronus, Coco is like  Bia, greek god of “power, force, might”.  The Cougars  chanted over and over ‘Instant Coco’ . Maybe next time, they can chant ‘Hot Coco’ because Coco’s force was hot in Moraga with steals, blocks, shots,  passes, you name it ‘Hot Coco‘ delivered it. Thanks Cougar Fans for your support!

Kaleo Feingberg, Justin Zegarowski and Landon Best-Santos played like Ares, Apollo and Hermes. These Dons brought their mental toughness with their ability to set a great screen, box out every play, take a charge, and execute plays under pressure. The Dons talent was the  Achilles’ heel for the Cougars.

Enough of Greek mythology, that is  simply epic tales and legends.   The truth is the Dons beat the Cougars without any lightening bolts, just the scoreboard, 46 to 30.

Zuber Does it Again for Varsity Girls Soccer

Girls Varsity Soccer Advances to Round 2 of NCS