Frosh Dons Run Away from Casa Grande, 44 to 14 Victory 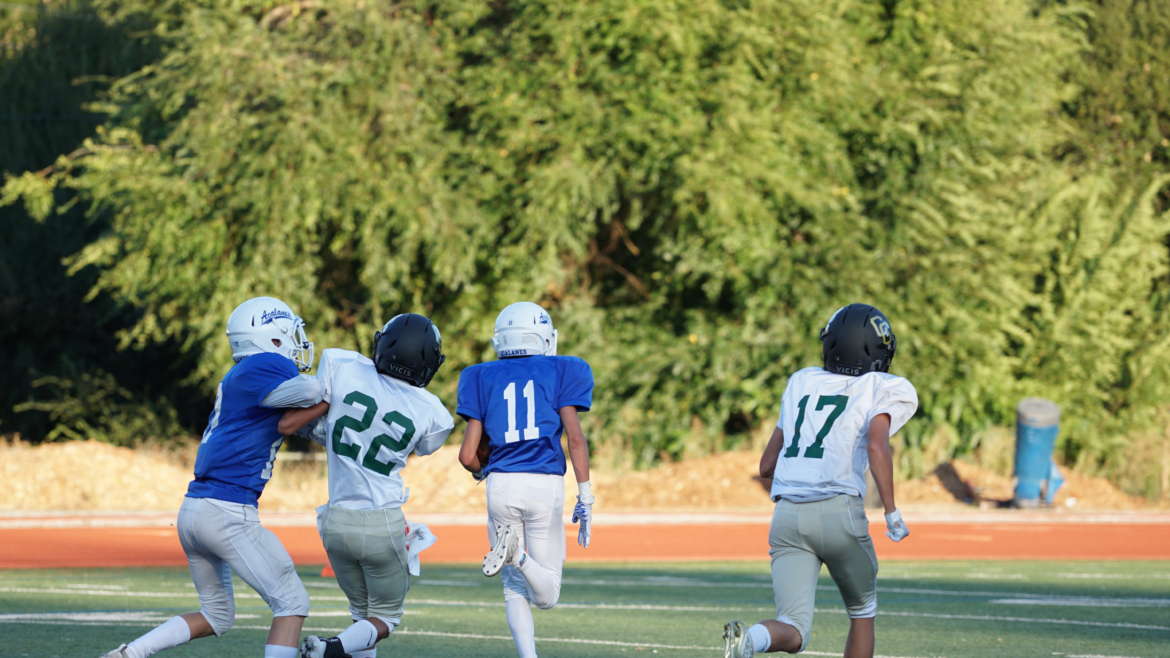 The Freshman Dons didn’t score on their first touch this week, but it didn’t take them long to reach the end zone, and they did it early and often against Casa Grande. After a strong return by Theo Stoll, the Dons Big Dogs on the O-line, Tyler Murphy, Miller Smith, Lex Jung, Nathan Kim and Marcus Julian, ripped a huge hole in the Gaucho defense that Tobias Schwing scampered through for 40-yard gain. One play later, QB Kyle Bielawski found Stoll on a quick bubble screen in the left flat and Stoll did the rest, juking several Gauchos on the way to a 30-yard TD. After struggling with two-pointers last week, the Dons showed immediate improvement on the subsequent conversion with Bielawski “schwinging” the ball out to Toby, who took it in for the two. Dons 8, Gauchos 0.

The Don defense preceded to make short work of the Casa Grande O. A dive was stuffed by Zach Robb inside and a sweep was run down by Ben Foox. Faced with third and long Casa Grande tested the Dons deep, and Andrew Habas made them pay, snagging the ball from several Gauchos and weaving 30-yards back for a highlight reel pick six. Again, the two-point conversion was good with Bielawski pitching to Schwing who sprinted to the right corner of the end zone untouched, Dons 16, Gauchos 0

On the Gauchos subsequent possession, they moved the ball down the field more successfully before a Foox sack and another Habas interception gave the ball back to the Dons. On the very next play Bielawski set back in the pocket with all day to throw and found a streaking Ethan Torres on a skinny post 75-yards to the house. The Dons completed the scoring with Bielawski on an option read around the left end for two. Dons 24, Gauchos 0, at the end of the first quarter.

After a quick three and out to start the second quarter, highlighted by a T-Rex (Murphy) QB sack, the ball went back to the Don’s offense. Exerting their will once again, the Moving Company of Murphy, Smith, Jung, Kim and Julian, cleared the way for RB Foox who bolted for 40-yards into the Gaucho red zone. One play later, Bielawski found Habas for another Dons TD. This time however, Andrew Huchingson came on to convert the traditional way, Dons 31, Gauchos 0.

Yet another stout defensive stand and turnover, gave the ball back to the Dons once more before the half (not good for Casa Grande). A ten-yard Bielawski scramble was quickly followed up by a 30-yard TD pass to Habas. The kick this time was blocked. Dons 37, Gauchos 0, at the half.

The start of the second half saw Casa Grande with their first score of the game on a long pass and run from their big TE. The Dons held on the conversion however, and the score was now Dons 37, Gauchos 6.

Casa Grande really never stopped the Don’s offense all day though, and Kyle was a killer, completing a 30-yard pass to Habas for another Acalanes TD. Rounding out his scoring trifecta (pick six, TD catches plus extra point), Habas kicked it through the uprights for the conversion, making the score, Dons 44, Gauchos 6.

With about a minute left, Casa Grande completed an impressive long 70-yard bomb for the final TD, and converted the two points, making the final score, Dons 44, Gauchos 14, as time ran out.