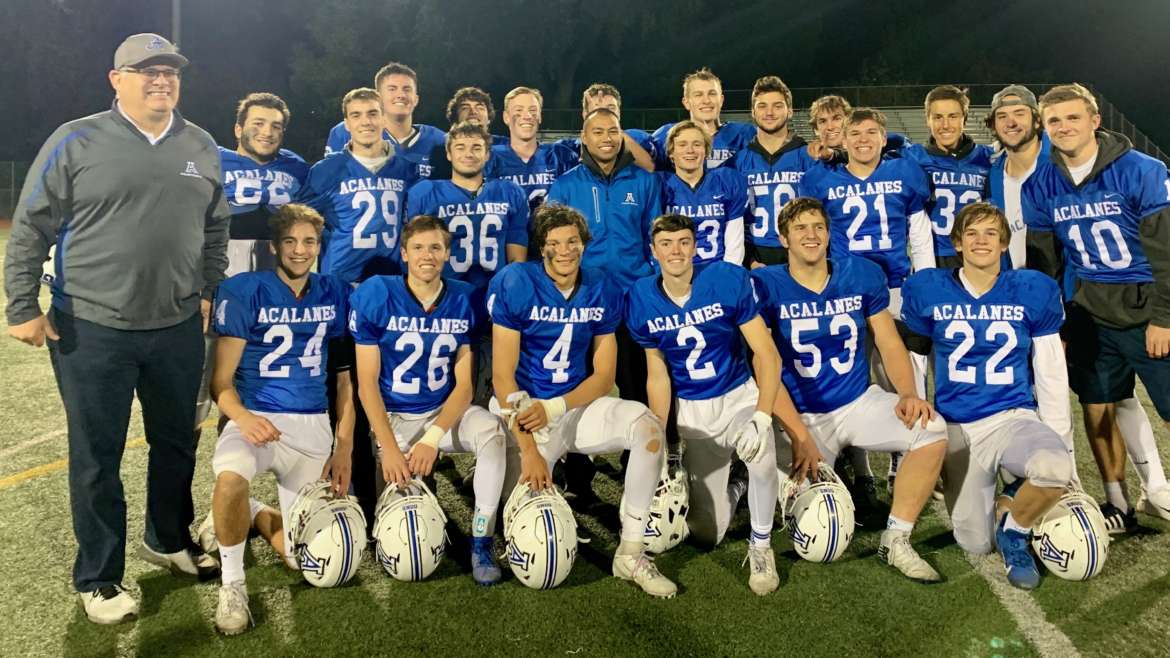 In front of a packed Senior Night stadium at Acalanes, the Dons rolled to a 56-7 victory over Alhambra, finishing league play with a 3-1 record and most importantly a share (with Campolindo and Las Lomas) of the league title – the Dons first football title in 40 years!  It was a particularly special night for the team’s seniors, who began playing in the Dons program as freshmen when Coach Floyd Burnsed came to Acalanes.

Junior quarterback Brady Huchingson was outstanding all night, completing 7 of 10 passes for 280 yards and five touchdowns (that would be an NFL passing rating of 152.1).  Huchingson added a rushing touchdown to finish with six TDs.

Senior defensive back Nick Giorgianni was around the ball all night, recording two interceptions.  His first pick started the Dons scoring, returning the interception 34 yards for a touchdown.  Giorgianni had a third interception that was called back due to a penalty.

Senior WR/CB Nick Pearson had big plays on both sides of the ball.  Pearson caught a Huchingson pass at the 50 yard line and ran it home for a 75-yard touchdown.  Later, he had an interception at the 10 yard line to stop an Alhambra drive.

Four senior Dons receivers had touchdowns.  Along with Pearson’s TD, Jack Muren had two TDs (9 and 71 yards), Lucas Eppinger had a 87-yd touchdown (with most of those coming after the catch as he weaved his way through the Alhambra defense) and Ryan Reilly had a 24-yd TD reception, beating an Alhambra DB at the 10 yard line to get to the end zone.

The Dons defensive highlights included interceptions by Jack Miles and Carson Gragg, and a sack for a safety by linebacker Niko Cortessis.  Other standouts were seniors Michael Roux and Mike O’Donnell, and juniors Graham Oh and Joey Carillo who each had multiple tackles.  Dons captain John Kalil was a force on the line all night.

The Dons (8-2) await the NCS Playoff seedings which will be announced on Sunday November 10.  The first-round playoff game will be Friday, November 15.

Christmas in July: Will ‘CIF Claus’ Bring Good News or Something We Just Do Not Want?!