D is for Defensive “Donination” 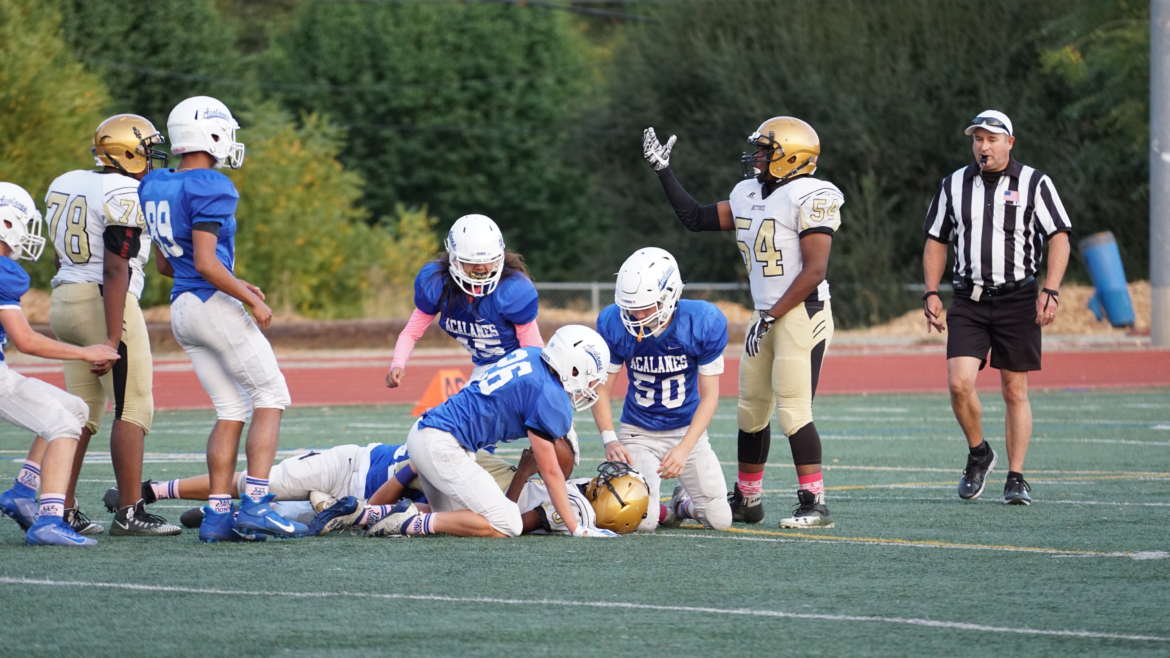 After three consecutive games where the Dons offense ran and passed away from its opponents, Thursday night provided another kind of shut down (non-PG&E related) for the Jaguars of Jesse Bethel. Early on it was a slugfest “Doninated” by the Frosh Dons defiant D. Besides putting up the first shut out of the year, the “Doninators” recovered four fumbles and wreaked havoc in the Jaguars backfield all afternoon. Along with the always strong play of Tyler Murphy, Miller Smith, Coco Gannon and Andrew Habas, DTs Tyler Worthington, & Nathan Kim, LBs Eli Brent and Nathan Bennett, and first time OLB starter Kaleo Feinberg, turned in stellar performances as well. Big props to Kaleo, who was not only playing the critical “Don”OLB role for the first time after just one week of practice, but also started at RB in place of an injured Toby Schwing.

While the Dons D was stuffing the Jaguars offense, the Dons offense was dealing with a Jaguars D that was sending the house on nearly every play. With eight in the box and several different blitz packages, the Dons struggled early on getting their rhythm. While the coaches had prepared the team for the ultra-aggressive Bethel D, it’s hard to duplicate the experience until it happens on the field. After a scoreless first quarter, QB Kyle Bielawski started to get hot, moving around in the pocket, scrambling for first downs and finding his talented group of wideouts. Second quarterTD passes of 38 and 12 to Theo, were followed up by an 11yd strike to Andrew in Q3. The running game also got on track in the 2nd half with powerful TD runs of 5yds by Kaleo and a punishing 12yd run through the entire Jags defense courtesy of Kyle.

Dig in for Dons Donsday next week

Four wins in a row now, for the streaking Frosh Dons, all despite some key recent injuries. The true measure of a team is how they play when a starter goes down and so far, they’ve passed every test. Next up is our neighboring Campolindo Cougars with many of our friends and ex-teammates on the other side of the ball.

The Frosh Cougars are currently undefeated and will provide a stern test for our boys. Hopefully we’ll get some of our injured players back, but either way the Dons will be ready to bring the Blue Heat to the Cougars in Moraga when we go into their house and show them how we “Doninate”.