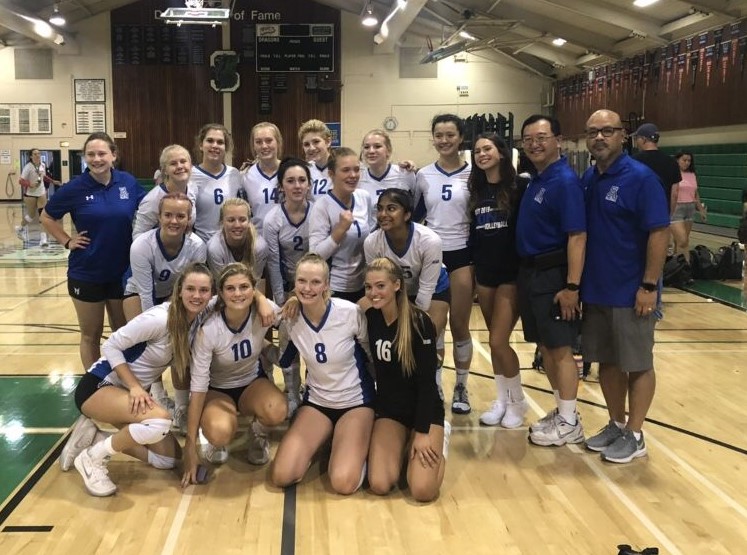 YOUR Acalanes Dons girls volleyball team made an early-morning trek to Sonoma on Saturday, looking to improve on their 3rd place finish from last year. The team played great and finished 2nd overall, visibly improving their play over the course of the long day. Here are some highlights for those with a longer attention span.

25-20. Dons win the first set despite a sleepy start — hey it was a darned early wake-up call this morning! — but the Dons got the train rolling against the Oilers, led by strong serving from Sydney Sowarby, Lane Webster and Aisha Mohanty.

25-18. Rodriguez fights back some in the second, and both sides feature some nice kills, but ultimately the Dons overpower the ‘Stangs to go 2-0 in Pool Play.

Now it gets real as the Dons face the #1 seed in the pool, the M.C. Pumas from Santa Rosa.

18-13. Dons maintaining a gap after a Sibley Ace and then a textbook offensive play: Sibley to Webster to Risch. Pretty.

4-3. The Dons and the Pumas trade points early. Meade gets a smart tip down the open line.

7s. Tied up as Olson tools the blockers with a kill. Kabam.

11-16. Rough patch and timeout Dons as M.C. is dinking us to death with well-placed tip shots right now, finding gaps in the Don’s “D”.

20-24. Timeout Pumas as the Dons keep fighting…good sign for future matches I portend.

21-25. Maria Carrillo — named after the original land grant owner of Santa Rosa — holds on and forces a decisive third set.

3-0. Double Aces from Webster sets a great tone for the Dons.

4-1. Webster peels the pass out of the net and gets it up in front of Kirke, who crushes it.

8-4. Solid Mohanty serve and Risch hammers the overpass right as it comes back over the net.

10-6. Risch Ace keeps the momentum with the Dons.

12-7. Cornish kills it in the middle…with authority, then follows it up with an Ace! Huge! Timeout Pumas.

2-1. Meade line kill gets the Dons started in the playoff round against the host school here at Sonoma Valley High.

23-21. Strong Sibley and Sowarby passing give the Dons an advantage down the home stretch.

9s. Mohanty ace ties it back up. Nice!

13-10 Makenzie Sauer steps in for a kill after an epic long rally. Wow. Both teams are playing great right now. Looooong rallies.

21-20. But then Acalanes forced to call a timeout after the Dragons flame the Dons for 5 straight points. Gut check time!

4-0. Olson nice kill. Another quick start by the Dons.

12s. And then she delivers a clean Ace! No doubt on that one.

9-8. Cornish hammers one in the middle. Tight early in the 2nd.

12-11. Crazy long rally with pancakes, syrup and some butter too. Dons prevail!

16-12. More insane back and forth. Neither team will give in, but the Dons are keeping just a few more balls inside the lines for scores. Timeout Cardinal Newman.

23-20. Olson kill…creeping closer. Can the Dons close this one out without the opponent making a late run?

25-20. Webster Ace again to win the match and send the Dons to the Finals! Woo!

The Dons fought hard, coming up on a 12-hour day of volleyball, but ultimately were outmatched by a strong and well balanced Redwood team that never let the Dons get any sustained momentum. Dons fell in two sets, 18-25, 9-25.

In the end it was an awesome day for the Dons, going 5-1, finishing in second place.

Congrats to Our Seniors: It’s Kick Off Time!